New Survey: Does your school have an official English-only policy on their campus?

Topic:  Does your school have an official English-only policy on their campus? 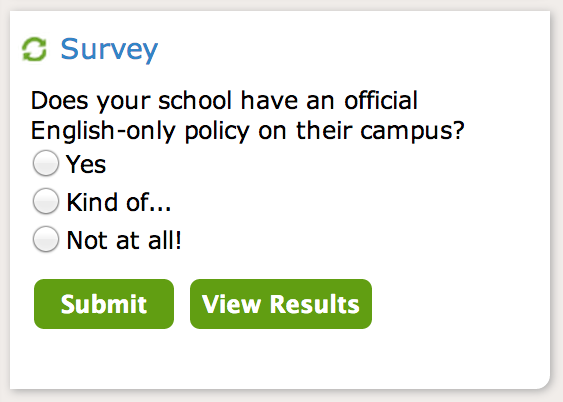 There are many cons to having an English-only policy at an international school.  It’s likely that it is giving the wrong impression of what being an “internationally-minded” person is all about.

International schools need to think very smartly about the makeup (language background) of their student body because of course that can affect what the “language of the playground” is. When the makeup is not balanced in a way that hinders the target language level/goal of the majority of the students (that the school wants them to achieve to), then of course many schools resort to a English-only policy to try to counteract that (for example at international schools with a majority of host country nationals)…and it would appear that not-well-thought-out solution fails almost every time. At least that is what was happening at a number of international schools nowadays.

Just because English is the target language of most international school classrooms, doesn’t mean that English is the superior or dominate language of the school; and teachers and administration should let their students and their parents know this in a clear, organized, and meaningful way. One suggestion on how to do this is to encourage an interlingual classroom.  In an interlingual classroom, students are encouraged to use their home languages in the classroom.  This suggestion will most likely not only be a new experience for you as the teacher, but also for your students…as they may not be used to being able to do this. In turn, some modeling and explicit examples on how to do this in a lesson would be necessary.

Another suggestion is to support multiliteracies in your classroom.

Share what your opinion is on this issue, as there are many perspectives and experiences at a variety of international schools that need to be shared with the rest of the community.

Also, go ahead and vote on Does your school have an official English-only policy on their campus? Go to the homepage of International School Community and submit your vote today!  You can check out the latest voting results here.

We actually have a comment topic related this to this issue. It is called: Describe language abilities of students at this school and what is the “common language spoken in the hallways”? Is there one dominate culture group?

Right now there are over 560 individual comments (about 100s of different international schools) in this comment topic on our website.  Here are a few of them:

“There is a 30% cap on Thai students in order to maintain an international population. The other largest groups as of 2014 are U.S. (14%), Indian (8%), Japanese (6%), Australian (6%) and British (5%). Approximately 50 nationalities are represented in total. Most of the students are fully fluent in English, and unless with a small group of friends who share similar backgrounds, they tend to use English.” – NIST International School (Bangkok, Thailand) – 29 Comments

“The school requires students entering after kinder have been previously educated in English. I would say about 75% of the students are fluent in English, and the rest are in the ELL program. Students almost all speak English, even if they have friends who speak their native languages. I am not sure of the exact number, but I would guess about half of the students are native English speakers.” – Mont’Kiara International School (Kuala Lumpur, Malaysia) – 27 Comments

“ASM is truly an international school. The school strives to maintain what is called the “magical mix”, meaning 1/3 is American, 1/3 is Spanish, and 1/3 is from all over the world. For this reason, the English level is extremely high. A mix of predominantly English and Spanish is spoken in non-structured environments around campus.” – American School Madrid (Madrid, Spain) – 27 Comments