Survey results are in: Which region in the world would you most NOT want to move to next?


The survey results are in, and it seems as if most visitors and members of International School Community who voted have the Middle East as the region in the world they would most NOT want to move to next.

Well, what is so undesirable about living in the Middle East? The really hot weather basically all year round?  The vast difference in the culture in comparison to your own?  The local food is not to your liking?  It could be any number of reasons why most of our members voted that the Middle East is the place they would most not want to move to next.

Being that many people don’t want to move there may present a problem for international schools in that region.  How can the schools find quality candidates to move to their Middle Eastern country and work at their school?

International schools in the Middle East are also known for their flexibility to hire single teachers with dependents, teaching couples with dependents, and single teachers with a non-teaching, trailing spouse. Not all international schools around the world will be able to hire these types of candidates.  Not every teacher with dependents though desires to have their children grow up in the Middle East region (i.e. they will most likely be living in compounds…which is not to everyone’s liking.).

If you are a single teacher, maybe the Middle East is also not the best place for you to move. It might be hard to find/going out on dates there.  It might be hard to meet the locals, but it also might be difficult to find other expat people to go on dates with since a high number of them might already be married.

Luckily on International School Community, we have a City Information section in the comments and information part of each school’s profile page that discusses many aspects of the city/region for each school.  One major reason to help international school teachers know more about where they would like to move to next is the weather.  Fortunately, we have a comment topic related to weather called:

• Describe the city’s weather at different times of the year. 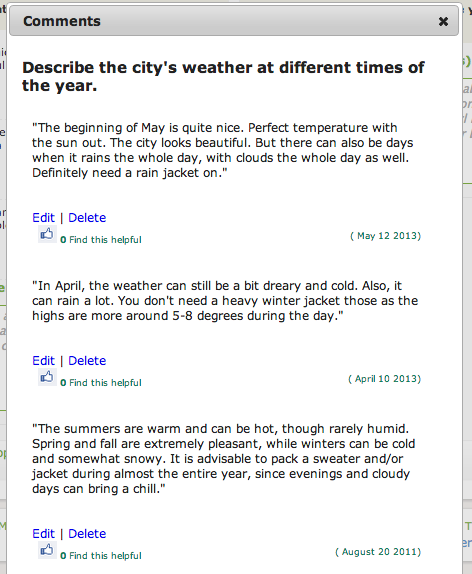 Taken from the school profile page.

One International School Community member said about working at : “For six months of the year, the Eastern Province has beautiful weather – from about mid-October to mid-April, ideal for outside activity. After that, it begins to get hot and from July to September it is very hot and sometimes very humid – generally oppressive. That is when everyone is very grateful for the fact everything is air-conditioned. Fortunately, school is out for much of that time and everyone who can leaves the area. From mid-October, the temperature starts to cool off and the Arab winter can be very pleasant, even requiring a few light wool sweaters and socks at night. In years when there is a fair amount of rain, especially when it comes in December or earlier, the desert blooms and everyone with a car packs up their tents and heads out to enjoy the flowers , watch the baby camels, and view the glorious night time sky undiluted by city lights.”

Another member said about working at : “Always good except for rainy season, which changes around each year. It can last for 1-2 months.”

Another member submitted a comment about working at : “From November to April, the weather is cool (22 to 28 Celsius), with little rain and lots of sunshine! You do get occasional thunderstorms though.”

If you are currently a premium member of International School Community, please take a moment to share what you know about the weather in the different regions/cities of the world at which you have worked. You can start by logging on here.