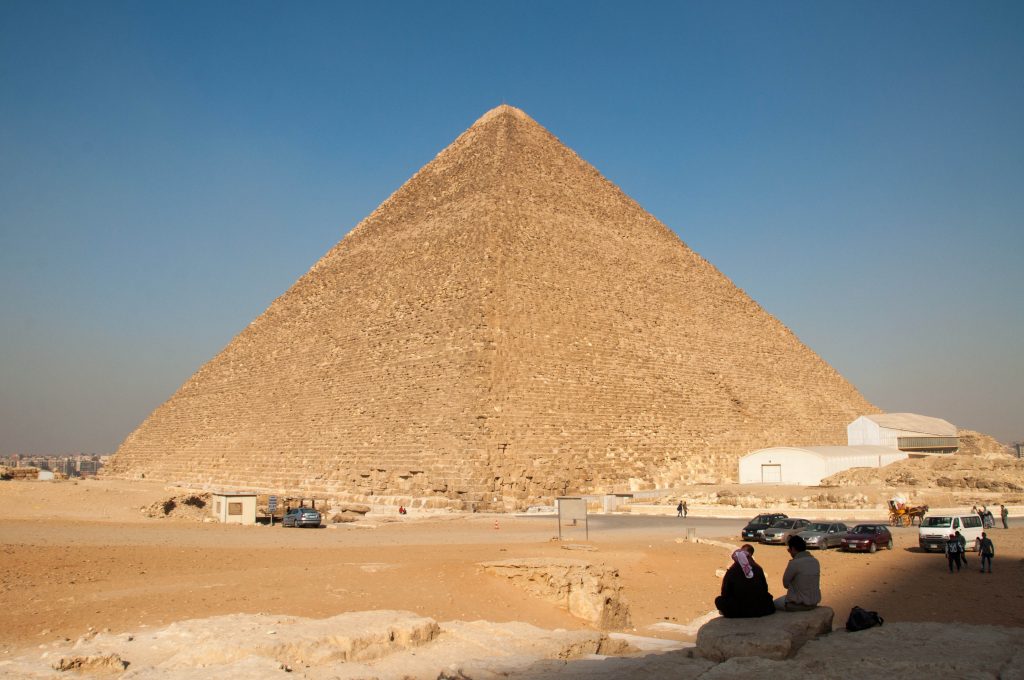 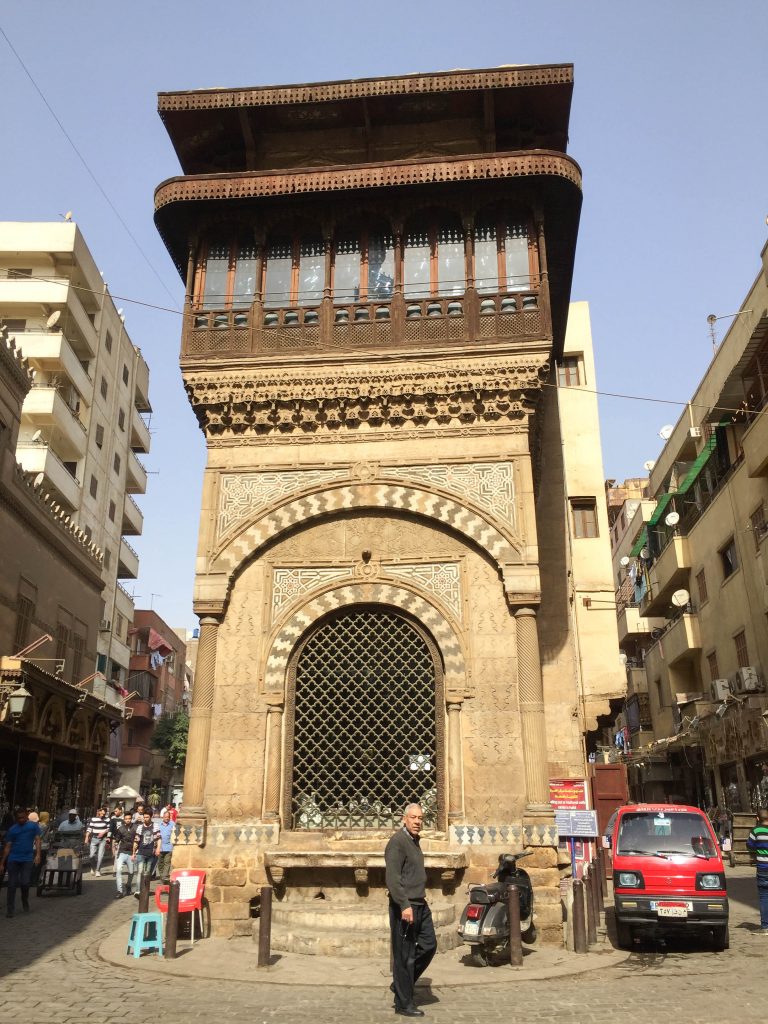 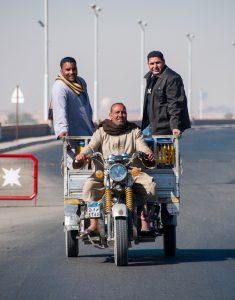 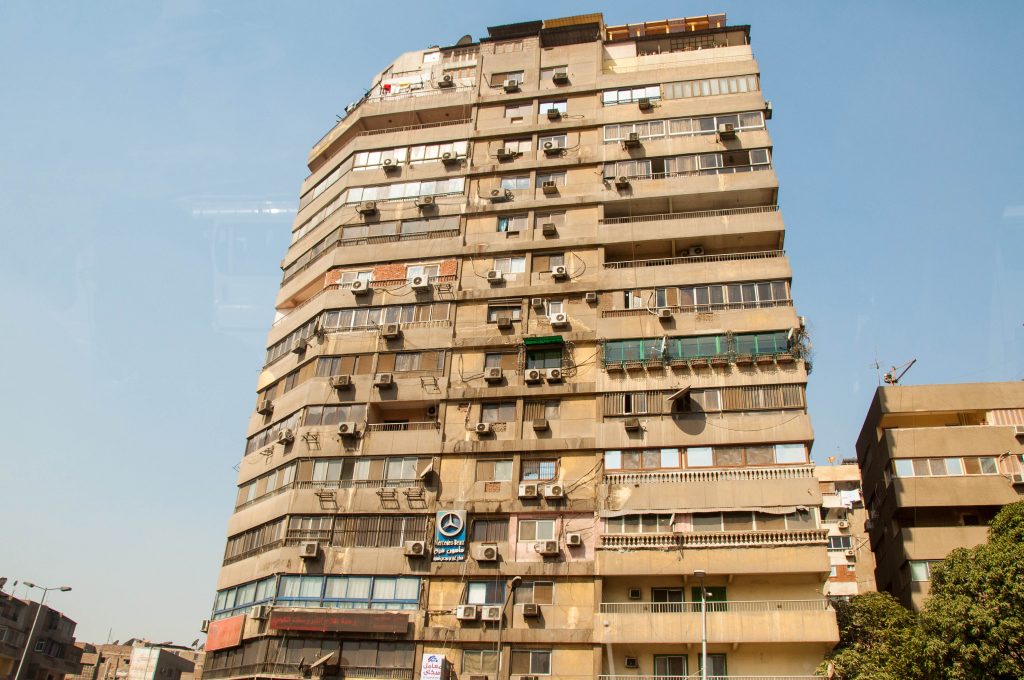 The Journey to School: American International School in Egypt

One of our members, who works at theAmerican International School in Egypt (New Cairo City, Egypt), described her way to work there as follows: 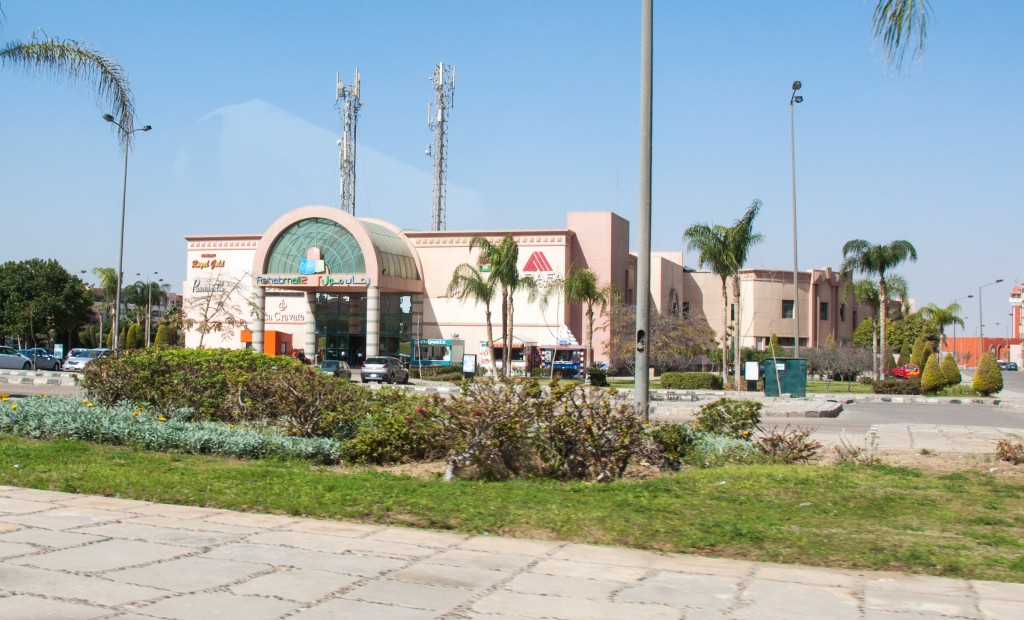 As I leave my apartment in El Rehab, I don’t know exactly what I will see. Life in Cairo is always interesting and sometimes unpredictable. One thing that is typical is the sunny weather, and today is not any different. The first place that I see from the car I am driving is the El Rehab Mall 2. I go there sometimes to go to the grocery store as it is only steps away from my apartment. 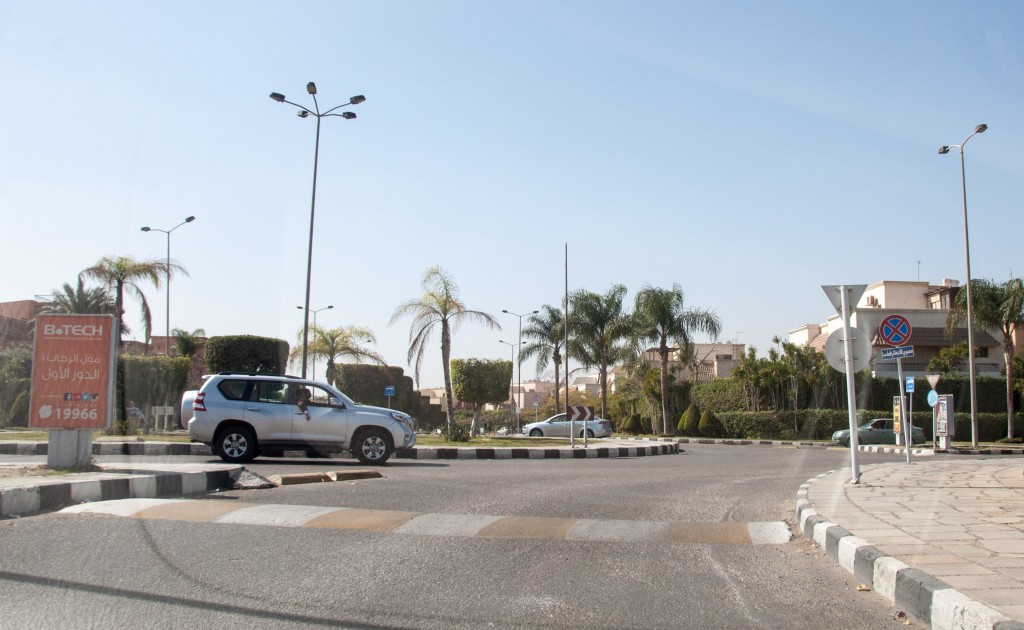 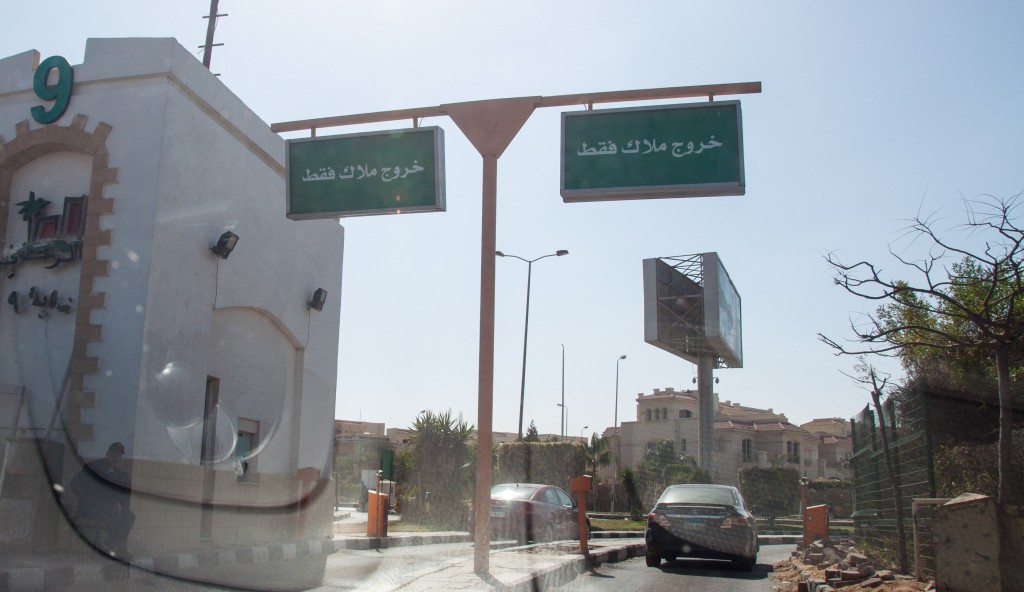 En El Rehab, you need to exit the area through a gate. There are guards there to keep the riff raff out. You need to show a card that you live there to enter through the gate. 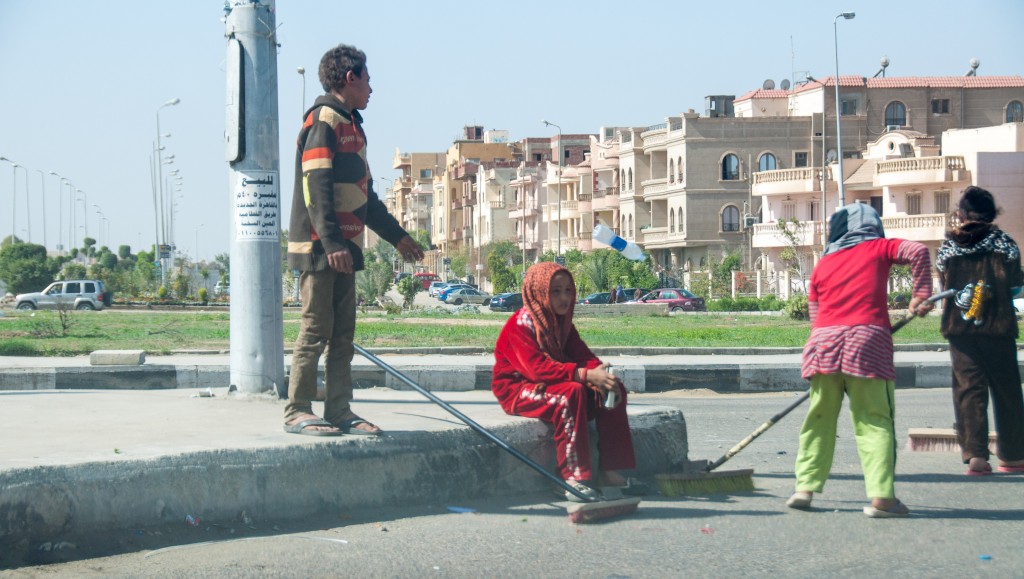 Another common sight on the journey is seeing many abandoned housing developments. They are all over Cairo. I still haven’t received an official explanation for this. I can only imagine that there was enough interest and money to get these projects started, but then the money and interest went away for some reason. It is really strange! 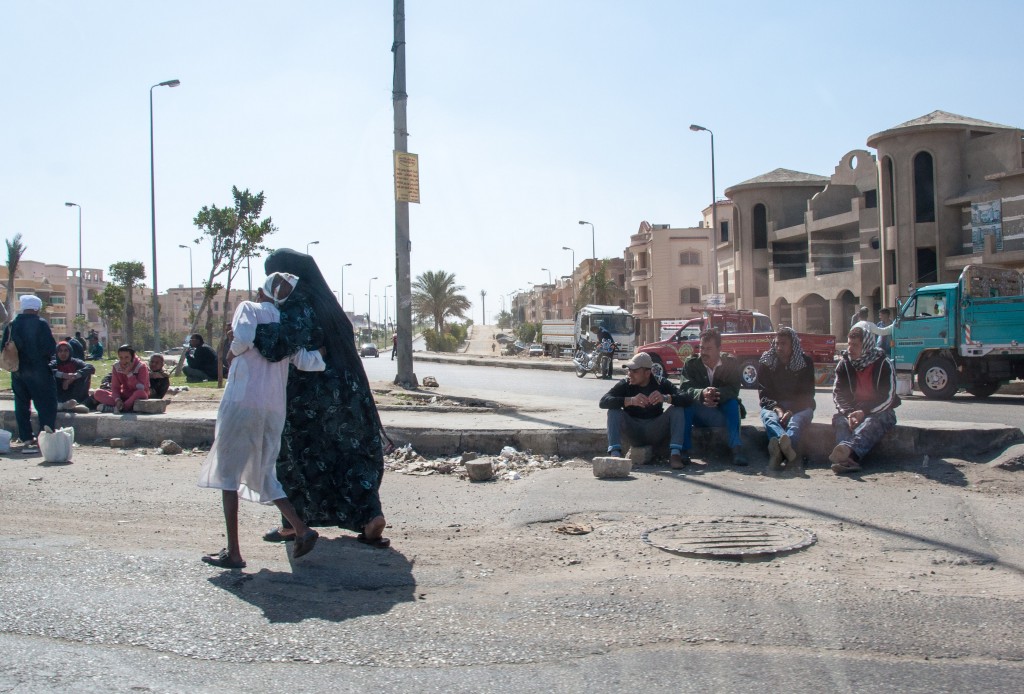 With 30+ million people living in and around Cairo, you are bound to see a number of people sitting on the curbs on most streets. So many interesting characters with I’m sure VERY interesting stories to tell. Around one of the roundabouts, you can find a number of men apparently waiting for work. Many of them are sitting around with sledgehammers next to them. I guess they get picked up by people needing some construction work done. 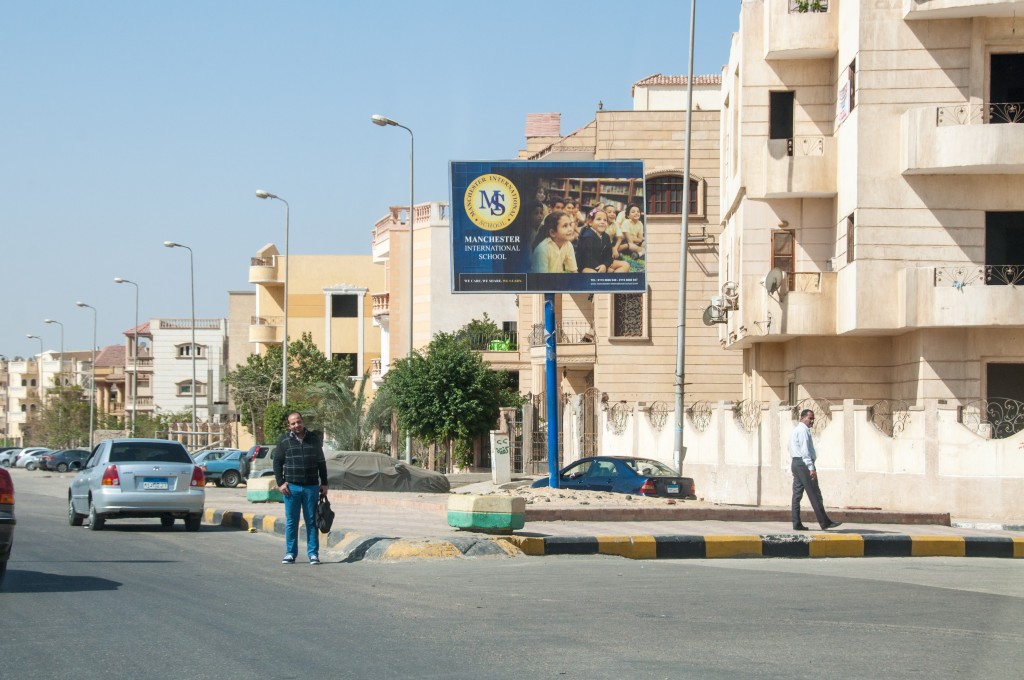 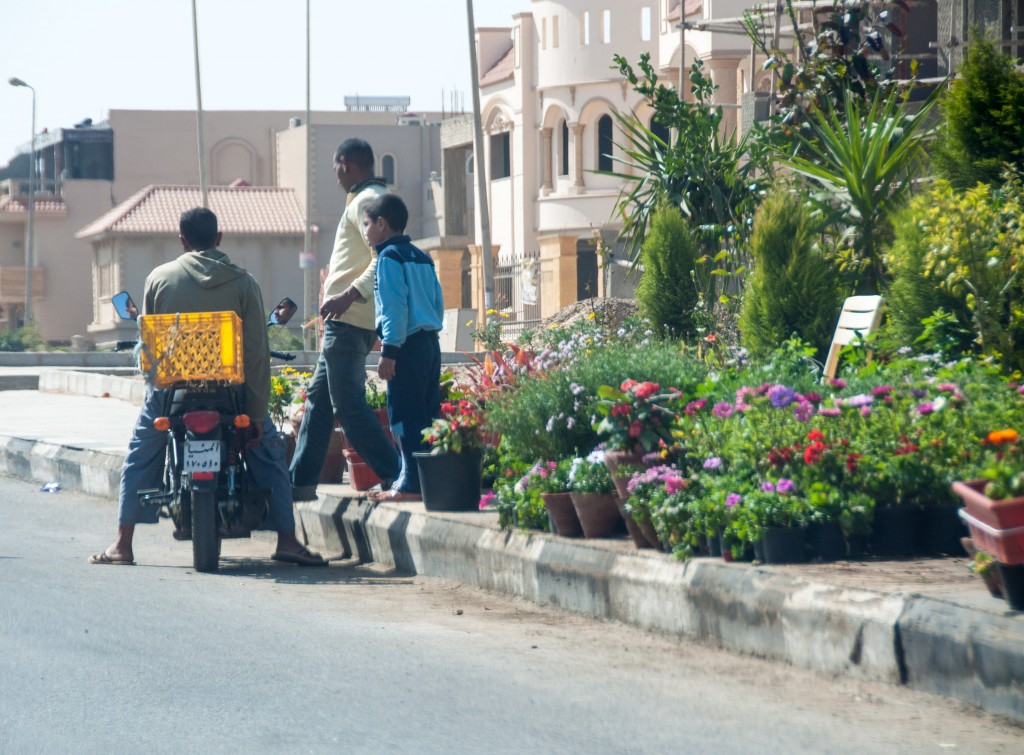 There are a number of people selling things on the side of the road. Mostly fruits sellers, but there is a plant shop as well. 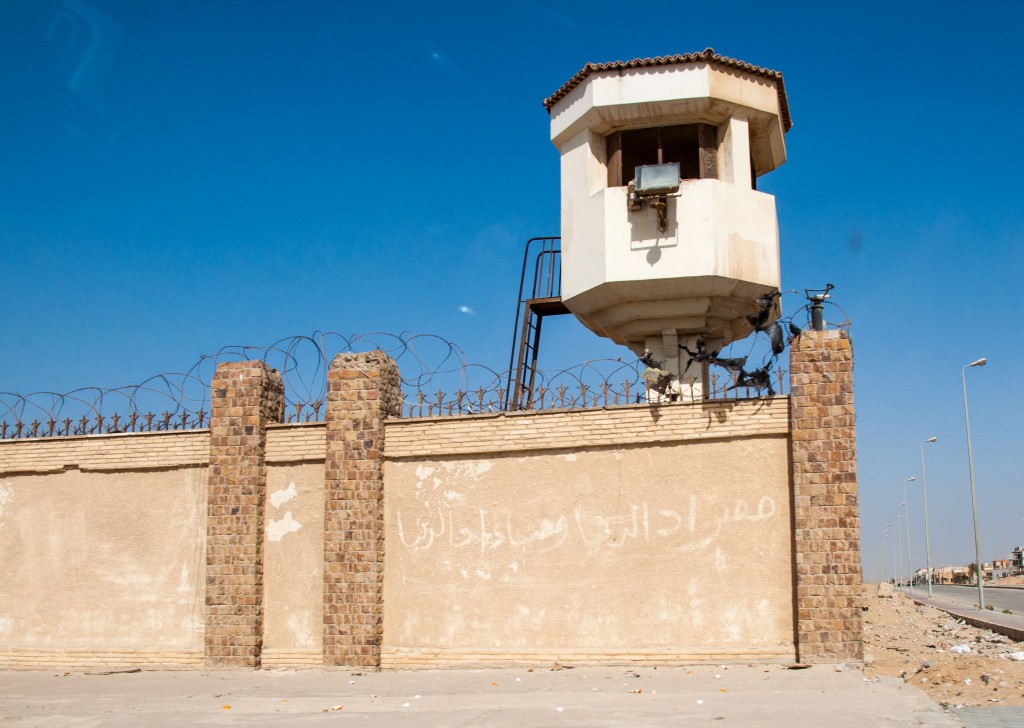 What looks like a jail is actually a police academy. At certain times of the year, you will see many young recruits standing around the outside of this place. It is definitely a sight to see! 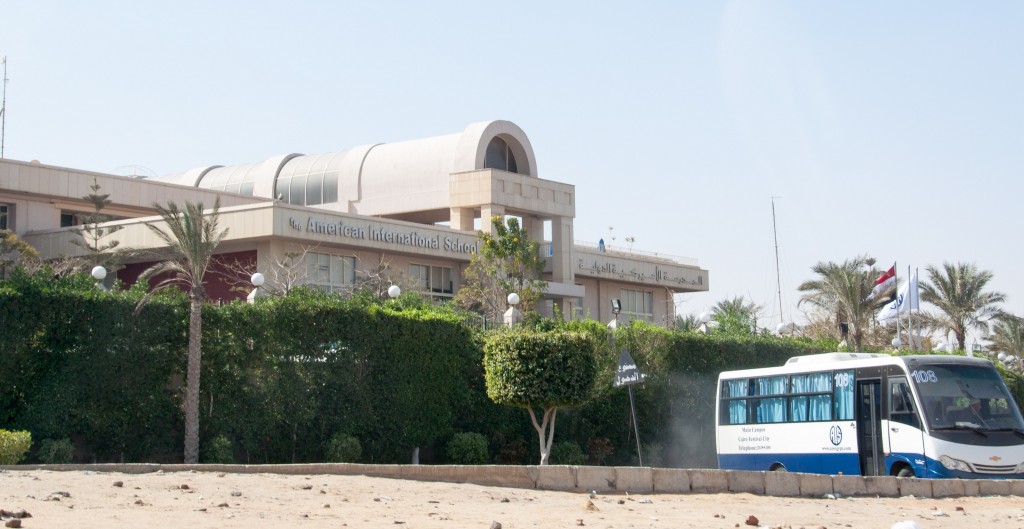 Finally, I arrive at the school in about 15-20 minutes from El Rehab. The school is located all on one campus. 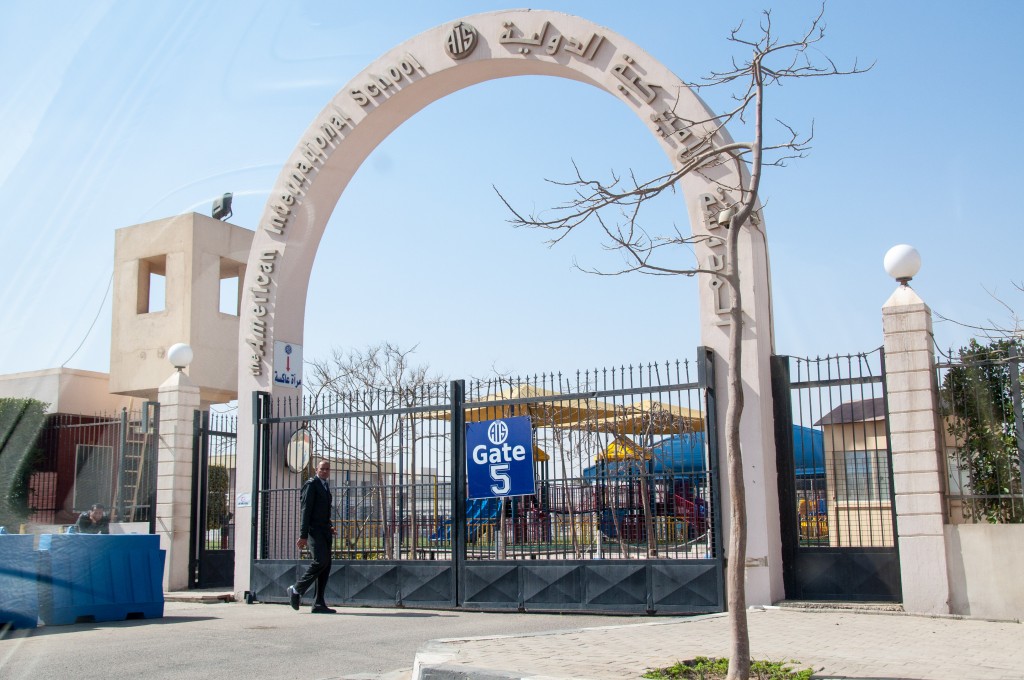 Here is the gate you enter to get inside. Of course, there are guards to let you in. 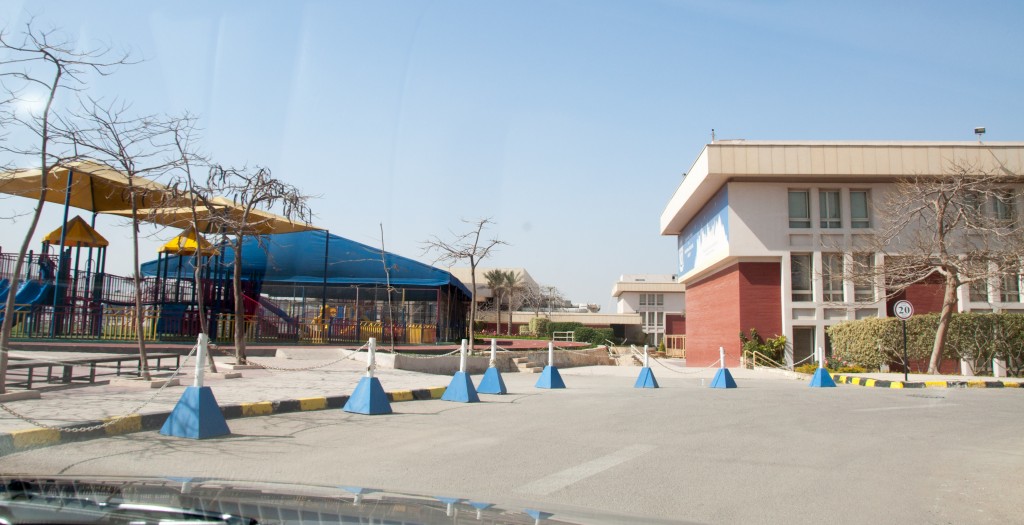 Once you are inside you can see the fields and playgrounds to the left. 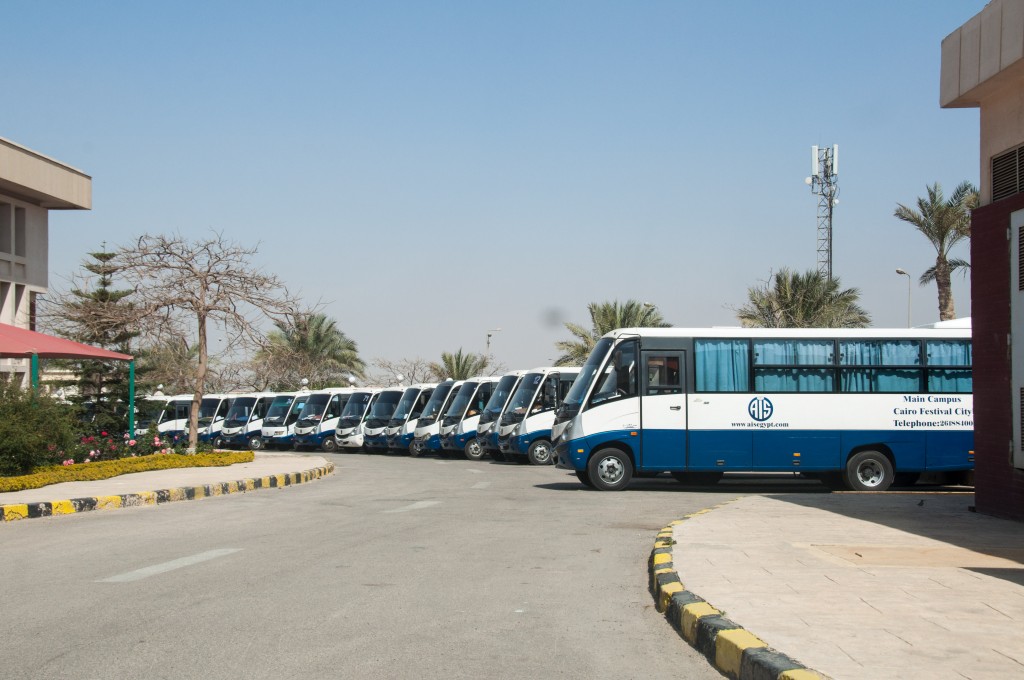 To the right, you will see the many schools buses that bring the children and teachers to school every day. 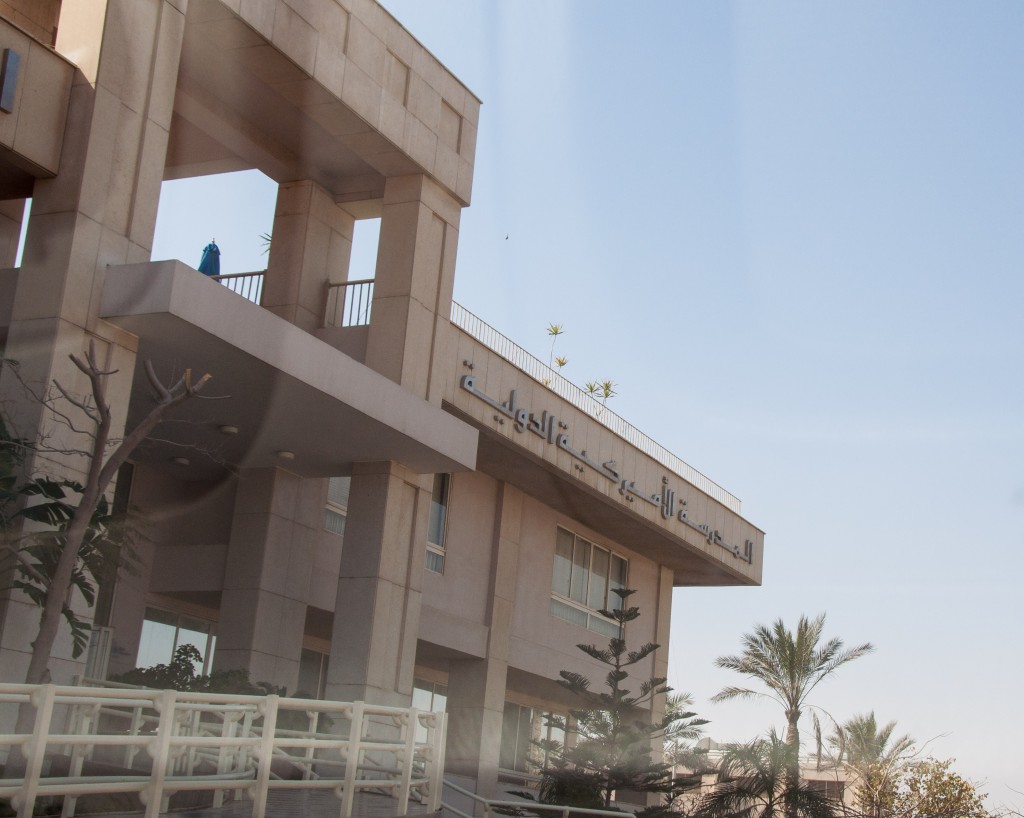 The school has a nice terrace part with a cafe! 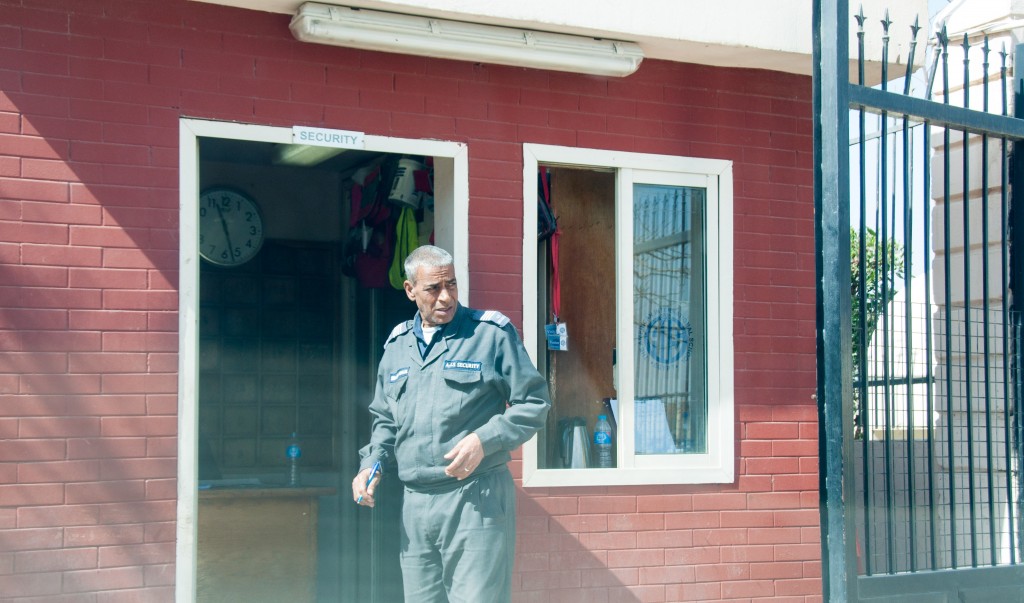 When you leave out the other gate, you will see a guard that has been working at the school for decades. He definitely has some stories (and secrets) to tell I’m sure!

What to know more what it is like to visit and live in Cairo?  Check out our blog article in our Traveling Around category about Cairo.

International schools that were founded in 1990 (Caracas, Jakarta, Cairo & Berlin)


Random year for international schools around the world: 1990

“NJIS, previously known as North Jakarta International School, is an independent, co-educational international school. It was founded in 1990 and is fully accredited by the Accrediting Commission for Schools of the Western Association of Schools and Colleges (WASC). NJIS is also a member of the East Asia Regional Council of Overseas Schools (EARCOS).”

“The International School Berlin-Potsdam (ISBP) was founded on 2 October 1990 and located in an eastern area of Potsdam in a large, rented villa on the Heiligensee waterfront. In September 1994, the school opened a second facility in a recently renovated villa down the street for its growing upper school.  On 1 June 2002 the school announced that it was changing its name to Berlin Brandenburg International School (BBIS) as of 1 September 2002. This change recognizes the fact that the school is no longer in Potsdam, that it is grateful for the strong support of the State of Brandenburg, and that it serves students and families in a large geographical area very well known both inside and outside Germany.”

“The American International School in Egypt has been one of Egypt’s leading schools since it opened its doors to its first 240 students in 1990.  Today, AIS Egypt has two campuses, with a combined student population of over 2000 students.”

“The American International School of Mozambique, founded in 1990, is an independent, coeducational day school offering an American-style educational program in English from PK through grade 12. The school year begins in mid-August and ends in mid-June. The School is governed by a 7-member Board of Directors, 6 of whom are elected by the AISM Association and one appointed by the U.S. Ambassador.”

“Founded in 1986 as an independent and private educational institute, Stafford is a coeducational, international school. It follows the British curriculum which prepares the students for the London University IGCSE and Advanced (A/S, A/L) Level examinations. High performance in these British exams qualifies students for entry into British and other foreign universities. The curriculum is stringent and comprises a broad and balanced range of subjects.”