The Journey to School: International School of Brussels

One of our members, who works at the International School of Brussels (Belgium), described her way to work there as follows:

The road to International School of Brussels…

The International School of Brussels is located in a leafy suburb of Brussels and nestled along the ancient Forêt de Soignes which is filled with towering trees and a variety of paths.  The school began in an old chateau (that is still referred to as “the chateau”) but has since expanded to fill a campus that has separate buildings for each division and a variety of facilities.  Today, the chateau is the main physical symbol of the school and houses administration, human resources, admissions as well as key personnel such as the school’s director and team.

Arrival at the school takes many different forms.  Some teachers have settled into local life and come by car while others take advantage of the free yearly transport pass and arrive by bus, metro or tram.  The location of your home will determine the best form of transport.  Many of the younger teachers prefer to live in the Ixelles area near the Flagey ponds where they are between the center and the school.  From Flagey, they can catch a 366 TEC bus that takes them in 20 minutes to the doorstep of the school.  Departure times during the school year are at 6:48, 7:30 and 7:50 am and teachers often sit together as they ride into school. 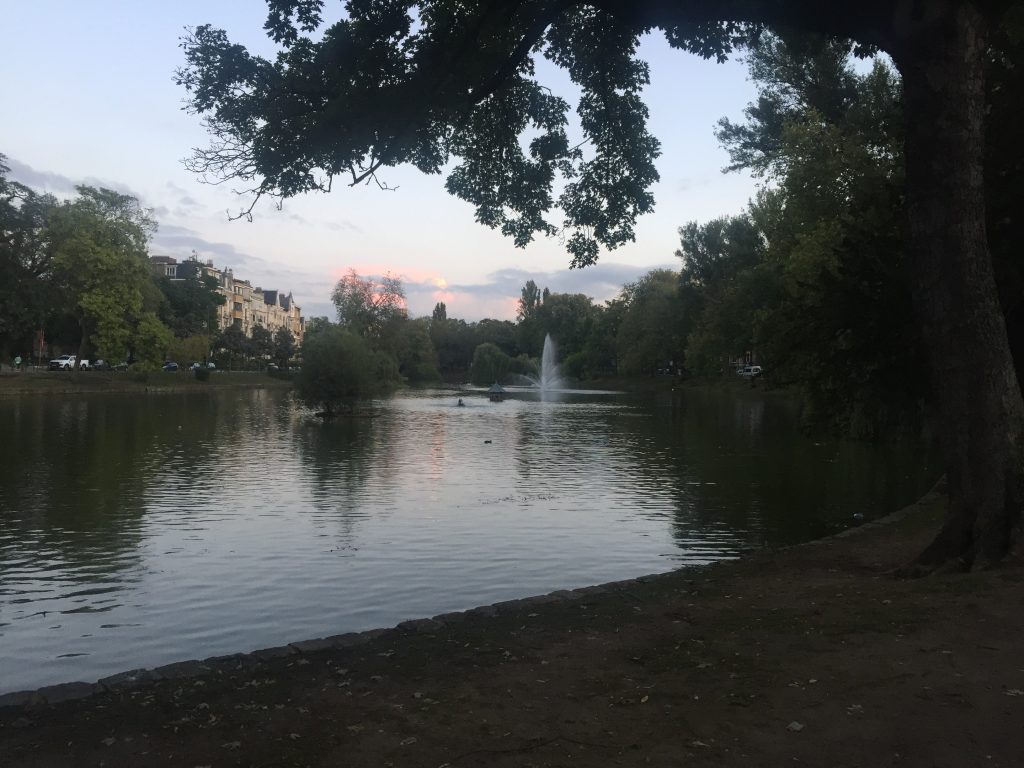 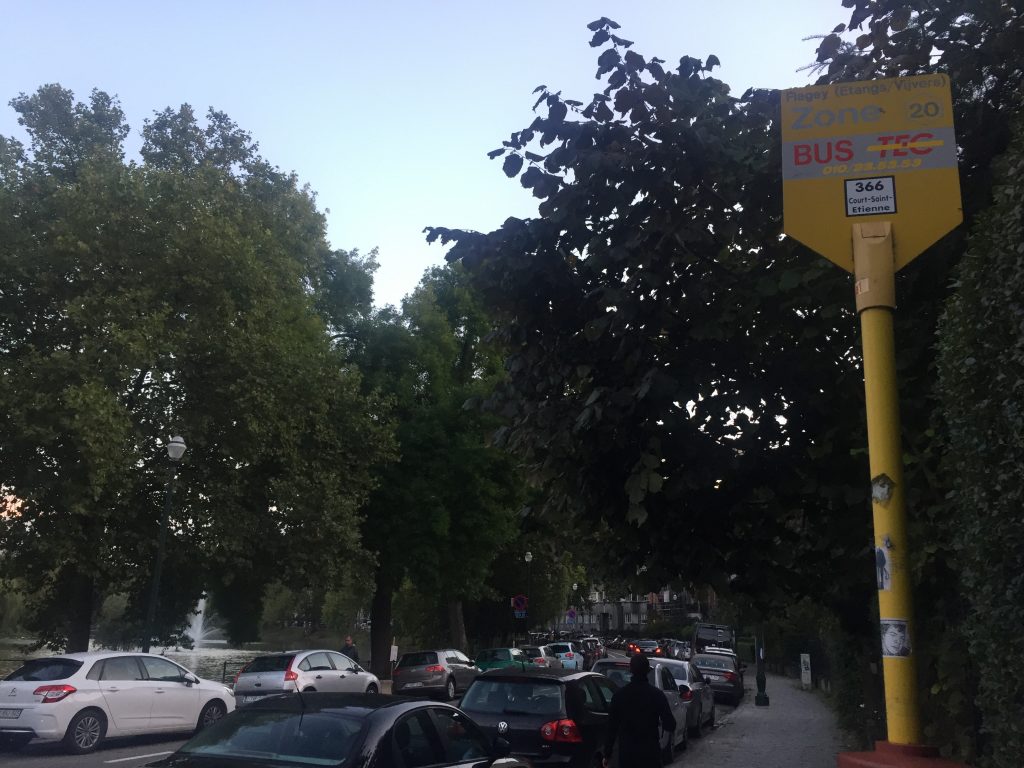 Bus stop next to Ponds 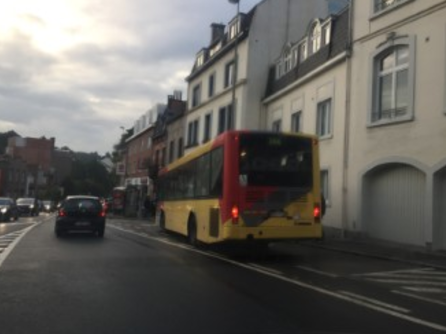 Another option from Ixelles or the other side of town in Woluwe St.  Pierre is the 94 tram which is more convenient for some as it leaves more frequently but it does require a 10 minute walk to school (The 94 tram cars are brand new and feature leather seats, laminate wood flooring and easy accessibility).  In the morning the walk from the tram stop at Delleur is a pleasant downhill stroll but in the afternoon, it can be a bit of a hike up.  The tram can be a bit slower than a bus, but it conveniently leaves at regular intervals. 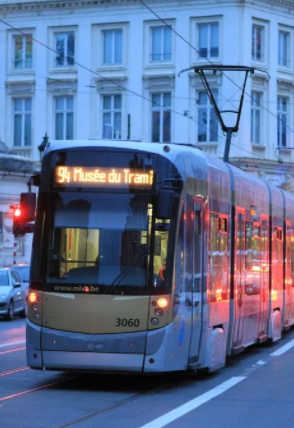 Some teachers also enjoy biking to school.  There are marked paths along most major routes and this is a mode of transport that’s becoming more popular.  While paths are marked, cyclists still need to be aware as drivers can sometimes get very close to the bike paths.  Biking along Franklin Roosevelt takes you past some beautiful embassy buildings as well as some architectural gems from the Art Nouveau era in Brussels.  There’s also an option to cycle on the winding roads that pass through the Bois de la Cambre, a serene manicured park on the edge of the city that connects to the more wild Forêt de Soignes. 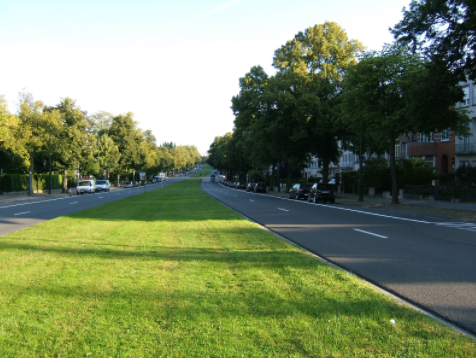 An area of growing popularity to live in has been the town where the school is located, Watermael Boitfort.  There is a lovely village and the walk to school is quick and pleasant.  This is a nice option if you’re actively involved in coaching and need to arrive at school early in the AM or if you want the shortest commute possible and a chance to run home if you’ve forgotten something.  Rent can be a bit more expensive in this area but the teachers who have moved there believe it’s worth it for the convenience. 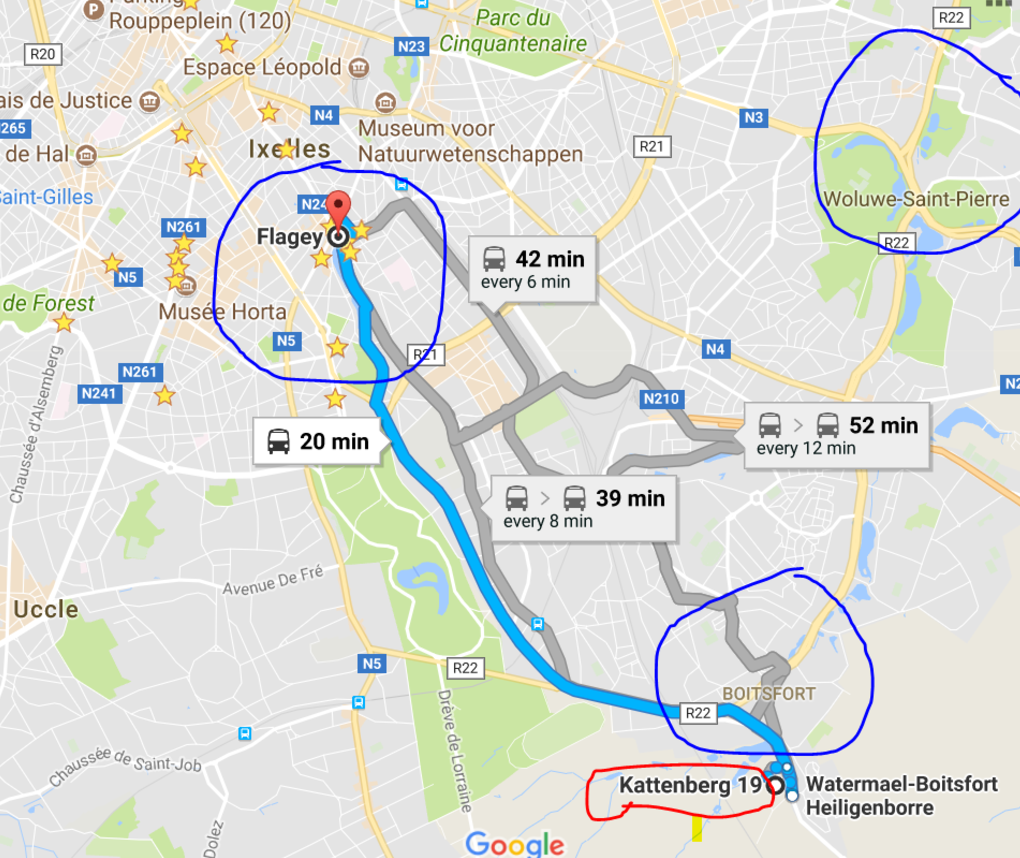 Parking on campus is getting more tight but there’s generally always space if you come by car.  Brussels is an easy city to own a car in.  Expenses such as taxes and insurance are relatively low and gas is manageable if you’re mostly using the car for commuting.  The school also offers financial assistance for kilometers traveled in lieu of the yearly Brussels transport pass as an option for drivers.

On a good day, I set my alarm for 6:15 so that I can leave my apartment in Ixelles with my car and arrive at school by 7 to get in a morning workout in the school fitness center.  The fitness center has showers so if there aren’t too many teachers working out, I can sneak in a quick shower before walking to my classroom by 8:10 to prepare for the start of the day at 8:40.  On a bad day (or after a late night), I can set my alarm for 7 and leave by 7:50 which gets me to school by 8:10 or 8:15.  Campus security has been beefed up after the terrorist attacks a few years ago so entering by the large double gates sometimes takes a few minutes if there is a line up of cars. Most teachers are on campus relatively early and until the late afternoon so in the darker winter months, everything is well-lit.  Some teachers stay later on campus taking advantage of faculty fitness classes or free language classes but others are just as eager to head out and try one of the many local beers. 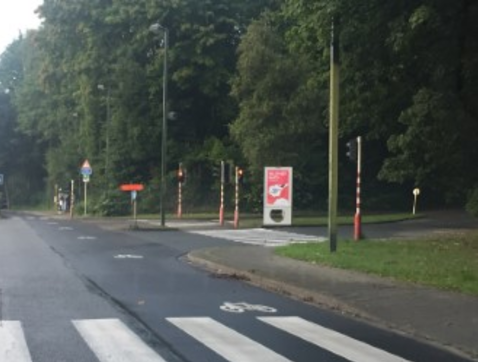 Back entrance to ISB Campus 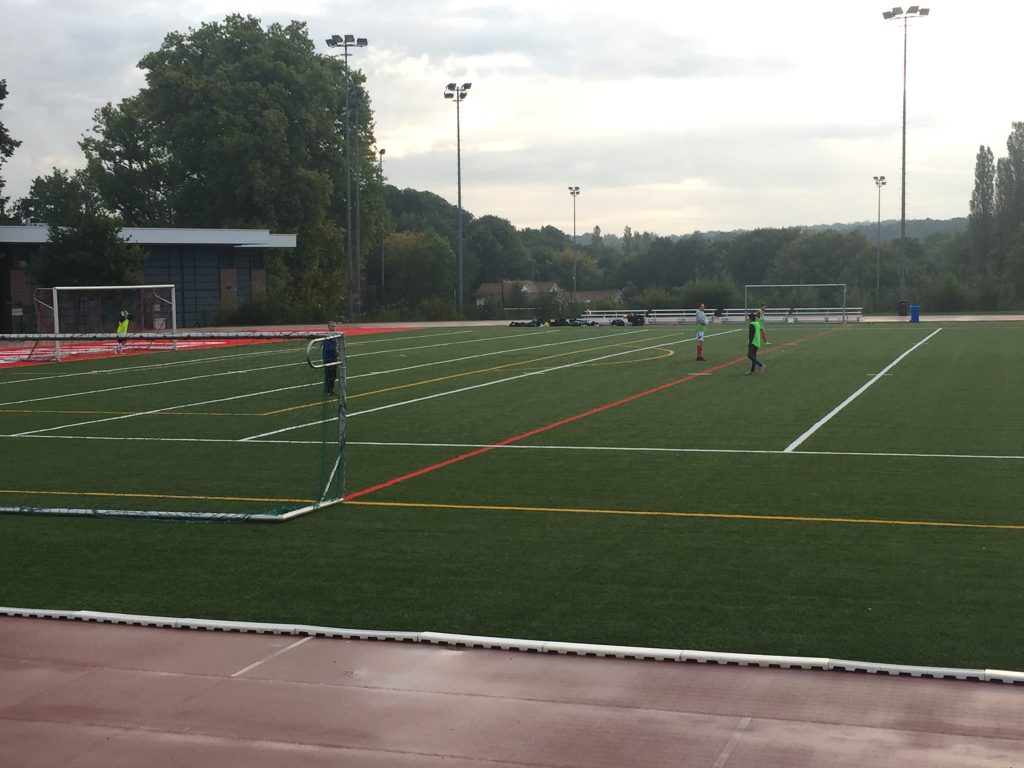 What to know more what it is like to visit and live in Western Europe?  Out of a total of 298 international schools we have listed in Western Europe, 137 that have had comments submitted on them. Here are just a few: