Survey results are in: On average, how many interviews do you go to at an international school recruitment fair?


The survey results are in, and it seems as if most visitors and members of International School Community who voted have had 1-2 interviews when they attend international school recruitment fairs.

Going to one to two interviews at an international school recruitment fair can probably mean one of four things:

• You probably don’t have very much experience teaching in general and teaching at international schools and are finding it hard to get schools’ attention.
• You have a lot of experience, but you are now very specific on where exactly that you would like to move to next in the world.
• You have a lot of experience, and you are very specific about which top international school that you would like to work at next in your career.
• Or there is a lot of competition this year which means there might be many other candidates vying for the same position vacancy.

Additionally, you just might not be up for going to five, six, seven interviews.  More interview can equal to more stress for you at the fair.  On the other hand, if you are very desirable to international schools at the fair and are open to where you would like to go, the more interviews you secure the better the odds that you will get some job offers!

There are many factors to consider when deciding on which international school at which to work.  Figuring out how and where an international school recruits can prove to be helpful information to know; just so that you are prepared and can make the necessary and appropriate plans.  Luckily on International School Community, we have a School Information section in the comments and information part of each school’s profile page that discusses this very topic.

• Describe their hiring policies. Which recruiting fairs do they go to? How do they typically hire (e.g. face-to-face interview, Skype, etc.)? Are there any hiring restrictions mandated by the country? 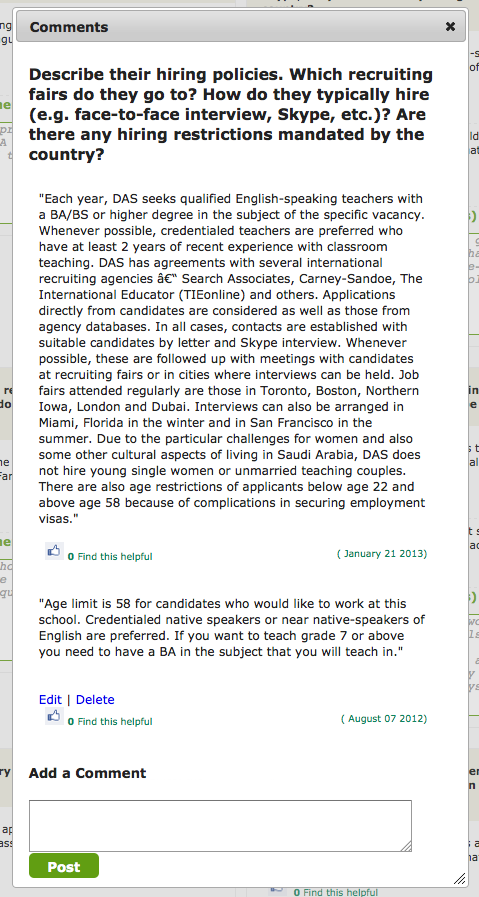 One International School Community member said about working at Misr American College (37 Comments): “M.A.C. attends the Cambridge job fair in Boston which is hosted by Search Associates and they have also attended the Dubai fair. I have seen their ads on TIEonline as well. They will also do skype interviewing. They employ a variety of ways to get their teachers. I was able to bring my spouse when I signed on with them and they helped get his residency. Not sure if they are still doing this though.”

Another member said about working at Seoul International School (69 Comments): “They use Search & ISS and do a lot of recruiting in Canada (all of the heads of the school are Canadian). Last year the HS principal did a lot of interviewing via Skype.”

Another member submitted a comment about working at Colegio Granadino Manizales (43 Comments): “I was hired at the recruiting fair in Kingston, Ontario, As far as I know, they also attend the Iowa fair and some teachers are hired via Skype.”

If you are currently a premium member of International School Community, please take a moment to share what you know by submitting some comments and information about how your international school recruits and what recruitment fairs that they go to each year. You can start by logging on here.

The Wonderful World of Int’l School Hiring Fairs: Lesson #5 – “Check your ego at the door.”

“I got about an even mix of offers and rejections from the schools I talked to. One school in particular seemed so right after two interviews that getting the rejection note broadsided me with the force of a turbo-powered school bus. I bumped into one of the interviewers later, and he told me that choosing my competitor over me was the hardest decision they made the night before, and that it took them over an hour of group deliberation to make it. A rejection can happen for all sorts of reasons – maybe they needed yearbook experience you didn’t offer, or needed that administrator whose spouse happened to be a less-qualified candidate for the position you want. So don’t take it personally.”

“Every normal person, in fact, is only normal on the average. His ego approximates to that of the psychotic in some part or other and to a greater or lesser extent.” Sigmund Freud.

The greatest sports legends, the inventors of things we rely on today, great actors and actresses, all of these people must seem to have a big ego. Maybe it comes with their achievements or our projections of them? Then there are the great dictators, the generals of war or just some average Joe that just won the biggest-ever on his lottery ticket. Ego comes in many shapes and forms, and albeit some are seemingly more attractive than others. It’s a hard task to know when to enhance or down play your own ego.

We’re constantly told to either just stand in line or be like others, that we don’t really deviate from the mass, that we’re just one in a million, that perhaps we’re not as special as we think. Then we’re told we need to stand out, make a difference, show our true colors, let the ego steer and victory will come our way.  So, what are you to do at the international school recruiting fairs?

Ego is an ambivalent thing, you could say that it’s both our chance and our fall. It’s the chance to express ourselves, to enhance our personality to make it clearer how we stand out from the masses, what makes us special, what we’re capable of; how we’re the best of all of them. But there is a line, and if that line is crossed, our personality becomes too big and a bit desperate, we express ourselves in a way so superior to others that we make them feel small, we become way too special, maybe even too good for our own good; we are the best of all of them, no question there, there’s “me” and no one else.

It’s often in job interviews we’re left with the difficult task of being the best and out shining the competition, but in such a manner that we don’t let our own ego get the better of us, and suddenly instead of standing out positively in the round robin session or administrator’s hotel room during the interview, we stand out negatively instead. It’s practically a game of ego vs. humble. It’s pointing out the things you are good at and how you are the best for the position, but it’s just as much being humble, being likable, charming, sitting straight, smiling, having eye contact, being interested, letting your ego shine from time to time, but not letting it consume the space.

“There’s nothing like rejection to make you do an inventory of yourself.” James Lee Burke.

And every so often your ego takes a blow. When you venture in life, there’s always the risk of rejection. Sometimes it feels like there isn’t any international school out there that wants to hire you. It’s basically the same whether you open your heart for someone you love, or you are at a job interview, getting that “no” is a sour sting to your ego. And that’s when the inventory begins: should I have? or could I have? Would it have? And so on and so on…

Every mountain we climb in this life should probably have two gates: “for exit hurry” or “in risk of rejection”. We can’t go through life (and international school recruitment fairs) without getting a little hurt sometimes, without bruising our ego. It’s all part of living as they say; the smart and clever ones. So maybe you didn’t have enough experience, maybe the connection just wasn’t there, or maybe, just maybe someone was just better than you. You know, you shouldn’t take it personal. It just means you get a few more rounds through the “in risk of rejection” gate. And who knows, just one week after the fair, when you weren’t offered any contracts to sign, you might receive in your email inbox the offer from the international school you have been dreaming of working at!  It is happened many times in our International School Community.