If you are seeking places to visit in China, I highly recommend visiting Xi’an, particularly if you enjoy history. Currently the Upper Primary Art Teacher for Xi’an Liangjiatan International School, I have had the opportunity to visit many of this ancient city’s sights. While it is not one of the top cities in terms of population, it ranks near the top in terms of historical importance. For over 1,000 years it served as the capital of China under thirteen dynasties and 73 emperors. Some of its notable dynasties included the Qin, Tang, Han, and Zhang. Even today, construction efforts of this rapidly expanding city continue to be interrupted by archaeological discoveries.

Most people come to Xi’an to visit the UNESCO World Heritage Site of the Terracotta Warriors, located about 20 km east of modern Xi’an. Despite the large crowds (over 1 million visitors annually), this site is a must. Don’t forget to visit the Exhibition Hall and the Qin ShiHuang Mausoleum, both of which are included in the entrance fee. Just as with any popular destination in China, avoid going during any Chinese national holiday. In winter, crowds are less, as is the entrance fee. Getting your own transportation there (such as a taxi or Didi – China’s version of Uber) will be more expensive, but it will enable you to arrive early and before the tour groups. After being one of the first people in line for tickets, I immediately headed to Pit 1 and had it to myself for over five minutes. Pit 1 and the Exhibition Hall were the most impressive ones for me. Cheap, local buses will take you back into Xi’an. Tour guides are available, but I opted to conduct my own research prior to visiting. You will find many people selling souvenirs; you can find similar ones in Xi’an at a much better price.

One of Xi’an’s most recognizable landmarks is its city wall. This massive well-preserved structure (much of which dates back to the 14th century) is surrounded by a moat. Rent a bike or walk on top of the wall, for all or part of the 14 km (8.7 miles) length. Around the time of Chinese New Year, a lantern festival is held here. To experience fewer crowds during this time, I recommend going while it is daylight and observe the changes to the lanterns and watchtowers as nightfall descends. For photography of the wall and surrounding city, you have a greater chance of clear skies outside of late fall/winter. Air quality in winter can be quite bad.

Centrally located within the confines of the ancient City Wall are the Drum and Bell Towers. Built in 1384, Xi’an’s Bell Tower is the largest and the best-preserved in all of China. Nearby is the Drum Tower (1380), also one of the largest in China. Both structures are beautifully illuminated at night. For a small fee, you can ascend the structures and also see some artifacts. From the Drum Tower, you can also see the immensely popular Muslim Quarters.

If you follow the crowds near the Drum Tower, you will find yourself in what is known as the Muslim Quarter. Foodies (particularly meat-eaters) will rejoice, with the plethora of tasty offerings in this crowded area. Snack your way along or rest your feet in one of its many restaurants that serve up signature dishes such as hand-pulled noodles (one of my favorites), steamed dumplings, or Yangrou Pao Mo (pita bread pieces soaked in lamb soup). The Xi’an hamburger also makes a tasty snack. The Muslim Quarter is also a fun place for photography–if you don’t mind the crowds. While in the Muslim Quarter, you can take in a short shadow puppet show in Gao’s Grand Courtyard.

While in the Muslim Quarter, don’t miss the Grand Mosque. The largest and one of the most important mosques in China, the Grand Mosque dates back over a thousand years. Enjoy its beautiful traditional architecture while you get a respite from the bustle of the crowded food streets. Its minaret and the Phoenix Pavilion are particularly noteworthy.

Located just to the east of the South Gate of the City Wall is the Shuyuanmen Ancient Cultural Street. Many of its well-restored buildings date back to the Ming (1368-1644) and Qing (1644-1911) dynasties. It is pleasant to wander the street and peek into the small shops selling calligraphy supplies, papercuts, shadow puppets, jade, paintings, and other souvenirs. During the Chinese New Year, the street is even more lively. At the end of the street is the famous Stele Forest.

Also known as Dayanta, the Big Wild Goose Pagoda is one of the most famous pagodas in China. Originally built in 652AD, the present 7-story brick structure was built without any cement. It was constructed to house Buddhist relics brought from India via the Silk Road. Visitors can pay a small fee to climb up the UNESCO World Heritage site to see some statues, paintings, poems, and great city views. While there, visit some of the structures within the Da Ci’en Buddhist Temple (648 AD). At the spacious North Square is the largest fountain square in Asia. At night, the fountain shows (set to music) are illuminated, as is the pagoda. The fountain show is particularly enjoyable on a warm late spring/late summer evening.

Located five kilometers away from its bigger brother, the Small Wild Goose Pagoda was erected in 709AD. Like Dayanta, the Small Wild Goose Pagoda is architecturally significant and well-preserved. On the same park-like grounds is the Xi’an Museum (free admission with passport). It houses over 130,000 relics and historical artifacts. Elsewhere in the park is a visitor center. I enjoyed learning more about how shadow puppets are made.

This world-class museum houses over 370,000 exhibits, of which many of the items were excavated within the province. Exhibits within the three main halls are dual-sign-posted in Mandarin and English. Some of the museum’s signature pieces include several TerraCotta Warriors, Tang Dynasty tri-colored pottery (my favorite), and Tang Dynasty mural paintings. Admission (with passport) is free, but the Tang Murals Hall requires a separate, paid ticket. Any lover of history/art should visit this museum.

Otherwise known as the Tomb of Emperor Jingdi, the joint tomb of Liu Qi and his empress Wang covers an area of 20 square kilometers. Built in 153AD, the emperor’s tomb is at the center. The Outside Pits Exhibition Hall is the first underground museum in China. Transparent walkways enable visitors to see excavations of his tomb in progress–a very cool effect.  It contains over 50,000 terracotta doll-size figures and life-like animals arranged as if it were an army formation.

Located just north of the original Tang Dynasty Lotus Garden site, this theme park is built in the style of the Tang royal garden. While it is pleasant to wander the beautiful grounds and admire the beautiful Tang-style architecture, it is especially beautiful during the Chinese New Year. During this period, huge lanterns and illuminated sculptures are a sight to behold in the lake and throughout the park. Indoor and outdoor cultural performances entertain visitors, along with the world’s largest movie on water-screen. I enjoyed the dragon dance outside the Zihyun building and some mini-concerts inside. Tang Paradise is also a beautiful place for photography in the spring.

If you happen to be in Xi’an during the cherry blossom season, be sure to visit Qinglong Temple (originally dating back to 582 AD). Opening hours are extended, so try to be there very early in order to avoid the hordes of people. Bring your passport and camera. The area around the main Buddhist temple buildings is full of cherry blossoms. The area around the bridge is also very picturesque.

Many of Xi’an’s other popular sites are located fairly close to each other. The subway, signposted in English, is continually expanding, making it easier to get around to some of these sights. Taxis are available, but be sure to have the address written in Mandarin, because few drivers understand English. For expats living in China, DiDi is convenient. iPhone users will be able to use Apple Maps VPN-free to navigate, including subway and public buses.

This article was submitted by guest author and ISC member, Melissa Enderle.

Traveling Around: Zhouzhuang, China (The life of an international school teacher is good!) 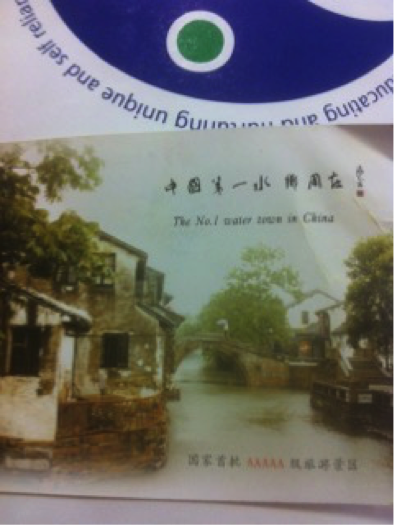 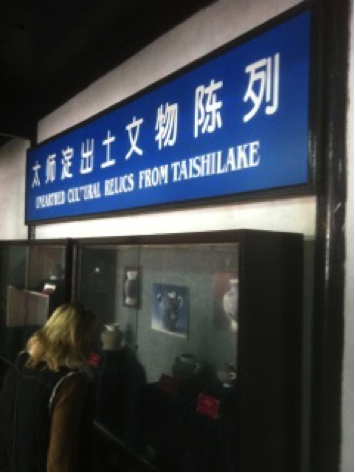 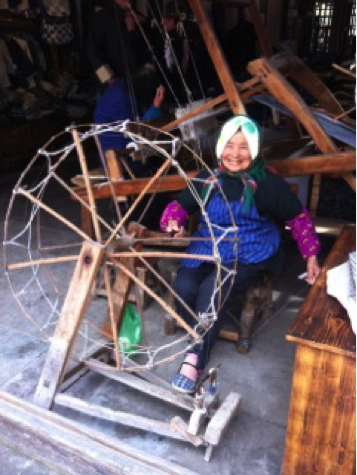 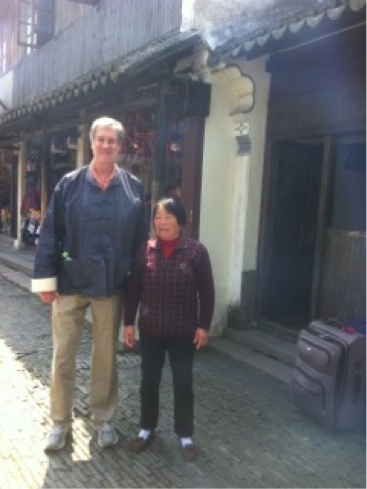 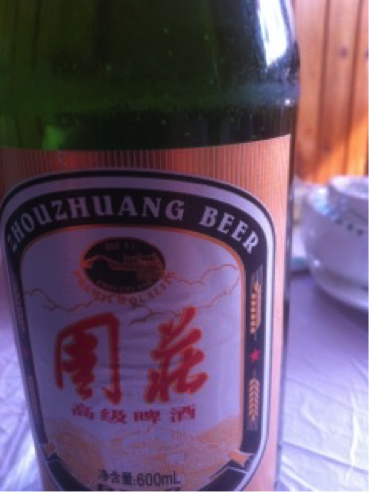 Currently, we have 197 international schools listed in China on International School Community. 132 of them have had comments submitted on them. Here are a few of those schools:

If you are on a trip right now, away from your host country, write to us here with your “Can you relate?” traveling experiences.  Tell us where you are traveling in the world, what you are seeing and how you are coping with any culture shock.  Once your Traveling Around experience is posted on our blog, International School Community will give you 1 free year of premium membership!