How much are international schools actually improving themselves?


Sometimes it feels like your international school is stuck in a rut. As hard as it tries and how well intentioned the teachers and administration are at attempting to make the needed changes, the school ends up just staying in the same lane doing the same things it has been doing for years/decades.

But many international schools do indeed figure out how to make the needed changes to help their school improve and move forward to be more current and progressive. It takes a lot of hard work and effort to get these changes to come to pass, sometimes it takes many months and more often years.

Maybe it has to do with international schools going through an accreditation process. They do need to go through a self-assessment phase to figure out what they are doing well and not so well. And then, finally after the accreditation is all over, they get an action plan with specific tasks to complete in the next few years. These tasks typically are required to complete with the aim at helping the school move forward and improve themselves.

Maybe the school gets a change of administration. New administrators in a school typically have a number of new goals that they’d like their new school to achieve and they inspire the staff there to join them. However, it is not always easy to get the staff to ‘get on board’ with the new changes.

More likely, it just comes down to the grassroots efforts of inspired teachers and administrators that are not only just doing their job very well, but often they will be doing things a bit outside their task portfolio. These inspired staff will find others to join them in the quest for change and improvement. And with a lot of hard work and figuring things out about how these changes could work, they get small and larger changes to happen. Getting change to occur is always a challenging task. But with an inspired effort and structured plan with clear expectations and purpose, these teachers and administrators get the job done!

Who doesn’t want to work for an international schools that is living their dream and their best self? When your international school is leading the way, it is the best feeling to be a part of that. The students will also want to be at that school as well!

“I’ve been in IAA for a few years now. In that time it has gone through some major and positive changes. Most of it has been extremely overwhelming to most of the staff as they were used to a different way of doing things. In my opinion though, it’s been for the best. Now, we are more organized and structured than before. There’s been tons of professional development and new / higher expectations as well…” – InterAmerican Academy Guayaquil (Guayaquil, Ecuador) – 62 Total Comments

“They have been working on having policies in writing and following those policies with more diligence. Before, things were a bit ad hoc but they’re trying to be more systematic…” – International School of Nanshan Shenzhen (Shenzhen, China) – 61 Total Comments

“I would say one of the biggest changes (at least in my division) has been morale. With a totally new administration team in the lower primary, people are quite happy and there is a nice sense of community. We have had very few vacancies the past couple years…” – Hong Kong International School(Hong Kong, China) – 145 Comments

“There has been an adjustment in salaries which is good for local staff as hyperinflation is a big issue. Recently, local staff have started getting subsidized lunches which helps a great deal. Secondary now has a TA which was very necessary as several students have special needs. This allows teachers to focus on other students and keep the lesson going…” – British School Caracas (Caracas, Venezuela) – 35 Comments

The Journey to School: Xian Hi-Tech International School in China

One of our members, who works at the Xian Hi-Tech International School (Xian, China), described his way to work there as follows:

This is going to sound terribly stereotypical but one of the many reasons I love living in Shaanxi province is the potatoes! Now can you guess where I come from? I will tell you later. My journey to work each day is a very short one, but my journey to Xi’an has been a long one. I hope you enjoy reading about it. 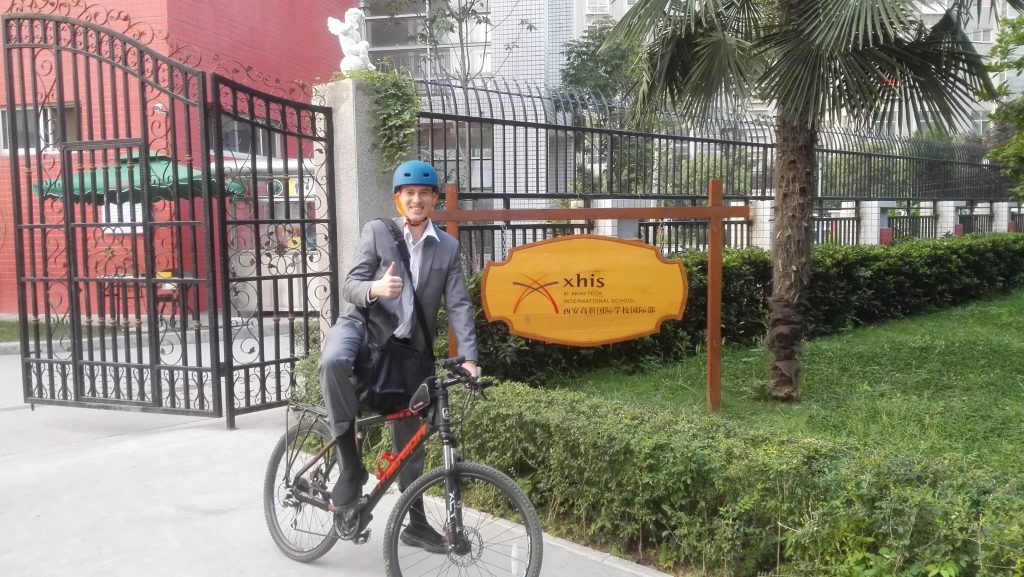 My name is Brian Lalor and I am in my third year at Xi’an Hi-Tech International School, in Shaanxi province in China. We are a two programme IB world school and are working towards offering three of the four excellent IB programmes. Our school is small at present with only 270 students but we are at capacity and have an exciting move to a new purpose-built campus coming up in August 2017. 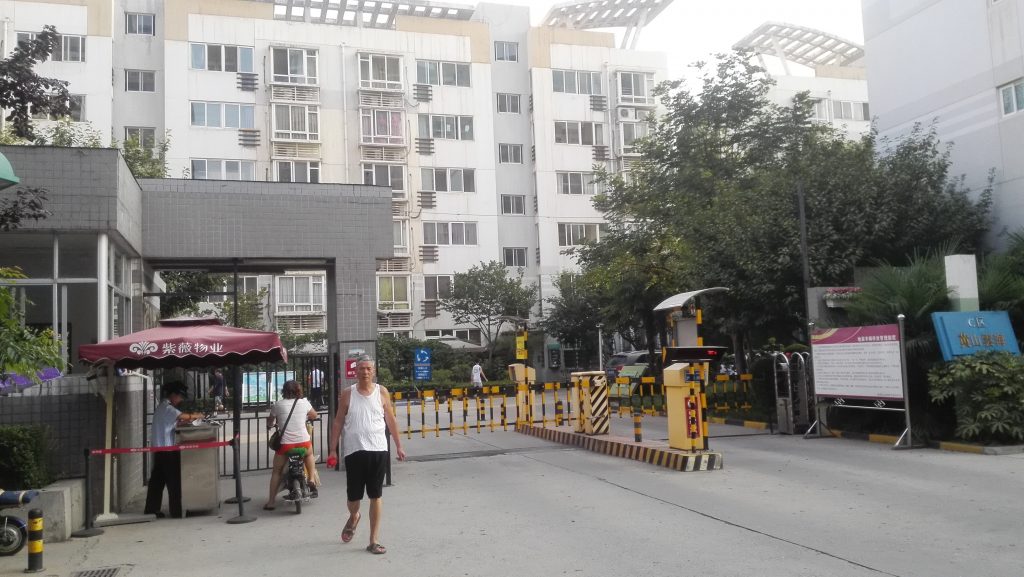 Each morning I get up and travel about four minutes to school! I know, the shortest ever commute, right? Our school is situated in residential area and all of our teachers’ apartments are located around the school. We are about 30 minutes from the city center in the southern suburbs. I ride my bicycle to school each day, that is why my journey is so short. 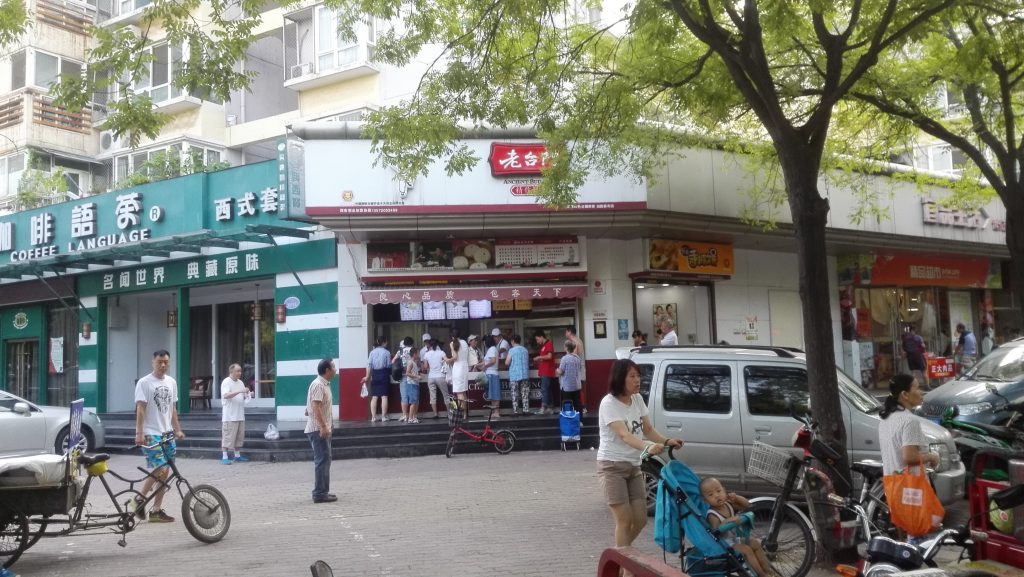 On my journey to school I pass through the morning market. Here local vendors sell fruit, vegetables, nuts and breads for very reasonable prices. One of the wonderful advantages to living in Xi’an is the potential to save money. It is much easier to live here when compared to other big cities such as Beijing, Shanghai or Hong Kong. Our school pays for our apartment, flights, international health insurance and gives us a monthly allowance for living overseas. Before coming to Xi’an I worked in Ha Noi for nine years, and in Jakarta before that. Each city has its own advantages and disadvantages. The main disadvantages living in Xi’an are the standard of healthcare and the bad pollution in Winter. 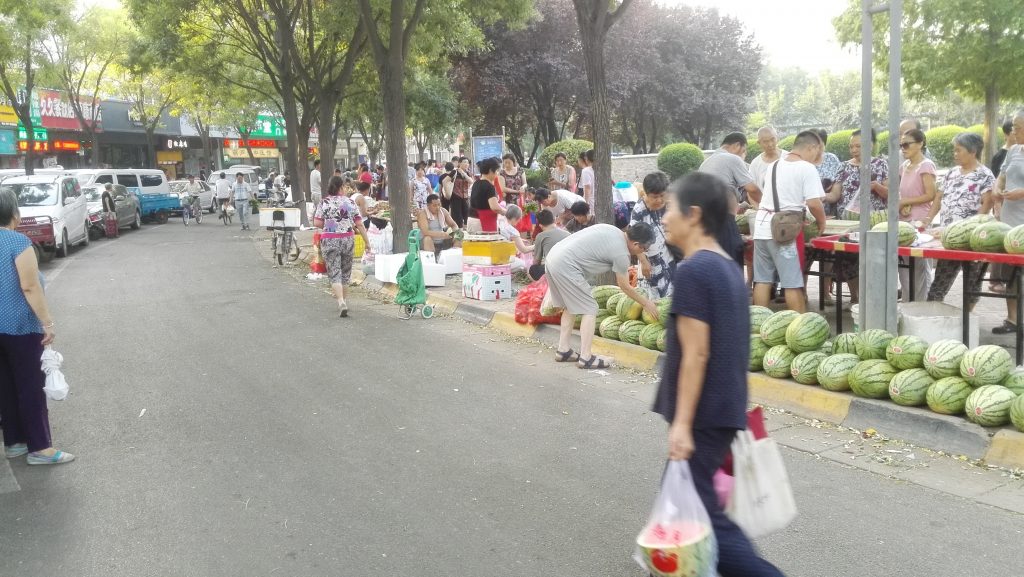 Some of the wonders Xi’an has to offer are as follows. We are literally just a short 25-minute car ride to the beautiful Qin Ling Mountains which provides us with a great way to escape the heat in summer and some lovely snowy landscapes in winter. Another highly attractive feature unique to this city, is its amazing millenary history, with archaeological sites found literally in every part of town, with the city wall being one of its main attractions. And who hasn’t heard of the world-famous “Terra Cota Warriors”. Xi’an was once the ancient capital of China so as you can imagine there are lots to see in and around the community.

If you have not guessed it I am born and bread Irish. Oh those lovely potatoes! The food here is incredible and you could literally have a potato dish, every day of the week. Some noodles are even made out of potato here!

What to know more what it is like to visit and live in China?  Out of a total of 165 international schools there are 110 that have had comments submitted on them. Here are just a few:


The number of students enrolling in international schools in Shenzhen had risen significantly this year (2011).

The International School of Sino-Canada (ISSC) had increased enrolments to about 300 this year, almost doubling last year’s figure.

Most of the students were aged between 2 and 17 and from countries and regions such as the United States, Europe, Japan and South Korea.

The increases were mainly due to a sharp rise in the number of foreigners and their families settling in Shenzhen and the increasingly high quality of the city’s international schools.

“We had high expectations about the future development of the school due to an increasing demand for international schools,” said Linda Coate, director of the admissions and public relations department of BCIS.

Meanwhile, more than 1.3 million students started the new semesters at public and private schools Thursday. Among these, 270,000 children of migrant workers had been accepted by public primary and middle schools, the city education bureau said.

According to government policy, all students with Shenzhen hukou and more than 500,000 qualified non-hukou students at primary and junior high schools did not need to pay tuition fees.

There were nine new public schools in the city, including five primary schools and four middle schools. They were mainly in Longgang and Bao’an districts and Guangming and Pingshan new zones.

The city planned to build 23 new schools in these areas in five years, providing about 38,000 school seats, the bureau said.