International schools get their voices heard on Listen To Us song


Over 33,000 students from schools around the globe have this year shared in one common learning experience – to master one of the vocal parts for a new song called Listen To Us. 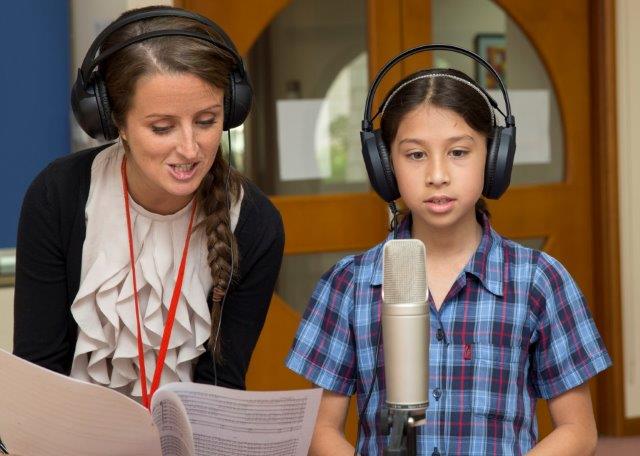 Listen To Us is uniting young people around the world as part of the Voices Around The World project. This is the third year of the project which has involved over 1,400 national, independent and international schools, and culminated in the release of the Listen To Us CD in July. The CD features the voices of over 5,000 students from recordings that were made by schools in 48 different countries including Cambodia, Israel, Iceland, Brazil and Turkey.

All proceeds from the sales of the CD plus a DVD will this year go to support schools in Tanzania that are in need of basic learning resources. 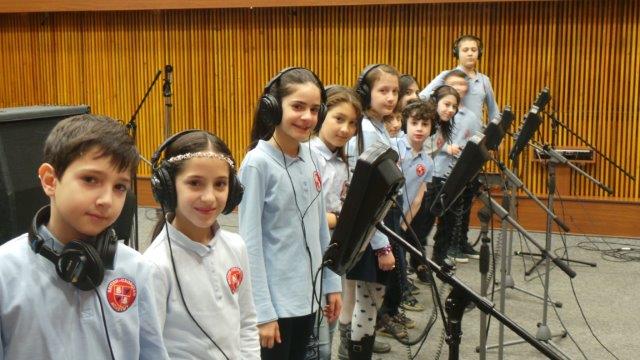 The Voices Around The World project, which is in its third year, is spearheaded by former music teacher and international school principal, Laurie Lewin, in collaboration with singer/songwriter Howard Jones. Laurie has travelled to many schools to support them with their rehearsals and recordings of Listen To Us, and to encourage students to think about the words they are singing. “Young people really want to make a difference,” he said. “They want to work together for change. Many who we’ve spoken to, from all around the world, show they’re absolutely passionate about the meaning behind the words of the song. You can see it in their faces and hear it in their voices while they’re singing. Whatever their age, participating in such a project has a huge impact on them.”

Laurie was inspired to find a school in Syria to participate in this year’s project thanks to the suggestion of a student who took part in 2014. “During last year’s project, I visited an international school in Dubai to help the students with their recording,” explained Laurie. “I spoke to a young girl there who’d been practising the song with me. She said ‘I’d like to be singing this with my friends back in Syria.’ She was a Syrian refugee. Thanks to her wish, this year we are thrilled to have children from Al-Shams (The Sun) School, Sweida city, Syria joining us on the recording.” 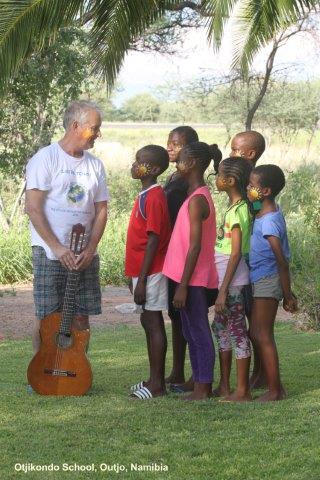 Sponsors that have helped to raise awareness of the project this year have included Coins Foundation, Monjasa, Bandzoogle, the International Primary Curriculum, and the Charter for Compassion.

Great Resource: Want to work at an international school in Hong Kong?


The Top Schools website (http://www.topschools.hk/) has some excellent information about the many international schools in Hong Kong.

DISCOVERY BAY INTERNATIONAL SCHOOL
“With 940 students, DBIS follows a curriculum based on that of the National Curriculum of England and Wales.  Admissions are non selective and students are drawn from the Discovery Bay community.  Demand for places is high and the school introduced a iPremium School Development Levy of HK$450,000 – s a means for parents to gain a “fast track” entry to the Kindergarten and Primary sections. Presumably, this means those that pay this premium levy get priority in the selection process.”

HONG KONG INTERNATIONAL SCHOOL
“A highly reputable school following an American-style curriculum. 58% of its students are American and 56% are Christian.  Debenture holders receive priority.  Lower Primary will be relocated for three academic years.  R2, Grade 1 and Grade 2 classes will relocate to an existing unused school building in Chai Wan. Click for detailed info on the relocation.”

HARROW INTERNATIONAL SCHOOL
“Opening September 2012.  The first international day and boarding school in Hong Kong. Operated by the Harrow International Group, Harrow International school is an arm of the 439-year old British school that educated Winston Churchill. The Hong Kong branch is the third in Asia. The others are in Beijing and Bangkok.  This is a full through-train school accepting students as young as 2.  Debentures sold out.  The first batch of individual debentures and individual capital certificates has been fully subscribed. Parents interested in ICCs and IDs, may apply to be put on the waiting list. The price of the second batch is yet to be determined.  Applicants may opt to pay the annual levy at $50,000/year – this is non-interest bearing, non-refundable and non-transferable.”

Currently, there are 17 international schools listed under Hong Kong on International School Community:

Check out the latest comments and information that have been submitted on these schools or submit your own at International School Community.

International schools that were founded in 2002 (China, Mauritius, Egypt, etc.)


Random year for international schools around the world: 2002

Utilizing the database of the 889 international schools currently listed on International School Community, we found schools that were founded in 2002 (excepts about their founding are taken from the schools’ websites):

“TIS was established in 2002 to provide a Canadian curriculum and accreditation to local and expatriate students. English is the primary language of instruction.
TIS opened with an initial total enrolment of 58 students on the campus of Macau University of Science and Technology (MUST) in 2002. By 2006, the School had grown to over 500 students and had become accredited with the Alberta provincial (Canada) government. Students graduate from TIS with an Alberta High School diploma that is accepted in universities around the world.”

“Northfields International High School (NIHS) is a privately owned secondary school situated in Mapou, district of Pampelmous in the north. From its small beginnings in 2001 NIHS has now over 280 students.”

“The Canadian International School of Egypt (CISE) opened its doors on September 15, 2002.  It is the first Canadian school certified by the Ministry of Education of Ontario in Egypt and the Middle East.  The Egyptian initiators of this project chose the Province of Ontario, Canada’s most populated province, to provide the curriculum and most of the teaching staff for the school.”

“Al Jazeera Academy opened its doors to students in September 2002. It is a modern international educational institution which comprises three separate schools within a single campus to cater for all students from Preschool to Year 13.”

“After the acquisition of a property suitable for the conversion of a school in 1997, the De Beer family developed the idea to fruition.  In 2002, Vale Verde International School was founded following years of investment required to bring the buildings in line with Ministry of Education requirements.”

“The International Montessori School of Prague (IMSP) was established as a private school in 2002. It was originally located in the Blatenska campus of Prague 4. IMSP started with 16 children in two classes : Toddler (1.5 – 3 years), and Primary (3 – 6 years).  In September 2003 the school was moved to a much larger facility in the Hrudickova campus of Prague 4. That school year we started with three classrooms: one Toddler, one Primary, and one Elementary.  In 2005 a second Primary class was added, so now IMSP had 4 classrooms: Toddler, Primary 1 and Primary 2, and Elementary. In 2006 the Primary program extended its afternoon component with Yoga, Music and Movement, Arts and Crafts, and Czech languge and culture.”

“Logos opened its doors in September 2002 with an enrollment of 58 students ranging from pre-kindergarten to grade seven.  At that time,Logos consisted of a single renovated house and an adjacent empty lot where a basketball court and small swimming pool were soon built.  Since that time,Logos added an additional grade level each year.  In the spring of 2008,Logos held its first graduation ceremony for 13 seniors.  Logos’ brand new campus consists of a basketball/volleyball/hockey court,athletic field,playground,library,cafeteria,2 computer labs,2 science labs,multi-purpose assembly room,and a swimming pool.  All of the classrooms are air-conditioned and equipped with essential teaching tools.  Our new facility is twice the size of our former location. We are very excited about this new provision.”

“On 14 April 2003 Mr. Chris Elder, Ambassador of New Zealand to Indonesia, officially opened the School and the enrolment reached 35 students. The school grew quickly, and in August 2004 space was secured at LPPI, The Banking Institute, on Kemang Raya, to house the Senior Secondary Students. Since that time our enrolment has steadily increased in all aspects. The growth had the effect of moving expansion plans ahead of schedule; the search for additional premises has been an exciting time.”

“From the vision of the school founders Riza Sripetchvandee and Ian Davison, a new school was opened in 2002 under the name of Windsor International School and ownership of Windsor Education Co. Ltd. The School was constructed at Soi 164 Ramkhamheang Road, Minburi, in Eastern Bangkok. Over the course of the next two years pupil numbers grew steadily.  A new building was opened in September 2004 to meet the demand from Early Years students. In April 2004, the School became affiliated to the prestigious and world famous Bromsgrove School UK and changed its name to Bromsgrove International School Thailand (BIST). Bromsgrove School UK was founded over 450 years ago and is a leading co-educational independent day and boarding school for some 1,500 pupils and is situated in the English Midlands and provides a first-class education with excellent facilities and resources, as well as enjoying considerable distinction in Sport, Music and the Arts.”

“International School of Wuxi (ISW) is part of the International Schools of China (ISC) – an organization that, for the last 20 years, has offered academically excellent programs to meet the intellectual, physical and emotional needs of students.”

“Kongsberg International School is a non-profit foundation established in 2002 by Kongsberg Gruppen ASA, FMC Kongsberg Subsea AS, Kongsberg Automotive ASA and Kongsberg Nærings- og Handelskammer (Chamber of Commerce and Industry). The school opened its doors in August 2003. The purpose of the school is to serve Kongsberg and its surrounding communities by providing a high quality international education for students, based on the International Baccalaureate Programme (www.ibo.org), using English as the principal medium of instruction. Although many of our students are Norwegian, a growing international community in Kongsberg and Buskerud has provided enrolment of students from over 22 nations.”

“The AIAN student body is comprised of students from over 20 different nationalities.  Faculty members are predominantly from the United States.   The teacher-pupil ratio is approximately 1:4, which promotes individualized instructional practices.”

“With the help of international consultants, SIS was able to redesign, construct and eventually turn an “abandoned” clubhouse into a school that is the talk of the town, in a housing complex of Bona Vista, South Jakarta. Located in a quiet neighborhood bordering the elite Pondok Indah real estate, the School is only two minutes from the Outer Ring Road making it accessible from many parts of Jakarta. The SIS complex boasts of an open, airy concept amidst lush, contoured gardens. In Bona Vista, SIS is able to enjoy all the amenities in this complex and this includes a competition-sized pool, soccer field, basketball courts and tennis courts. After a busy construction schedule, SIS finally opened its doors in its new complex in January 2002 with bigger classrooms and better facilities. The enrollment today includes a student population coming from at least 25 different nationalities.”