In my earlier career in public schools in Alberta, Canada I was a Drama teacher. The arts always seemed to be under threat in the public education system, and in my experience Music, Art and Drama teachers always seemed to be fighting for their survival. We had thriving Drama classes and a popular extra-curricular programme at my school where students in Junior High and Senior High competed in Zone and Provincial Drama Festivals, but when I went to teach in Australia on a year-long exchange they cancelled the Drama programme to save money, and only the Art classes and the Band programme survived the arts cuts that year.

Teaching in Queensland, Australia for a year was an eye-opener as far as the arts went. Programmes seemed to be very well supported with excellent facilities and had far more to offer students such as many workshops in specialities like mime, street theatre and dance for example than the much more basic curriculums I was used to in Canada. The arts curriculums seemed to be very extensive and arts taken for granted as a part of an Australian school. After a huge well supported musical “Annie Get Your Gun” I returned to my school in Canada where we had no theatre and I taught Drama in a regular classroom, pushing aside the desks as needed.

I had to return to Canada and teach as an English teacher even though I wanted to teach Drama. For many students in my experience, the arts are vital to balance out academics and sports. All students need an opportunity to excel and be successful in something, and for many that is not their regular exam classes or a sports team. So the art teacher and I collaborated and kept the school productions going, a total of 25 Junior and Senior High shows over the years where students could act, sing and dance or work backstage, or designing the set. Students loved the opportunity to be creative, and often it was the behaviourally challenged students or those who didn’t quite ‘fit in’ in other classes that loved Drama the most. We continued to participate in the Zone Festivals winning many times, and what a treat it was to be in a real theatre! The highlight was going to the Provincial Drama Festival and winning Best Ensemble and raft of other awards for our huge production of “The Canterbury Tales.’ 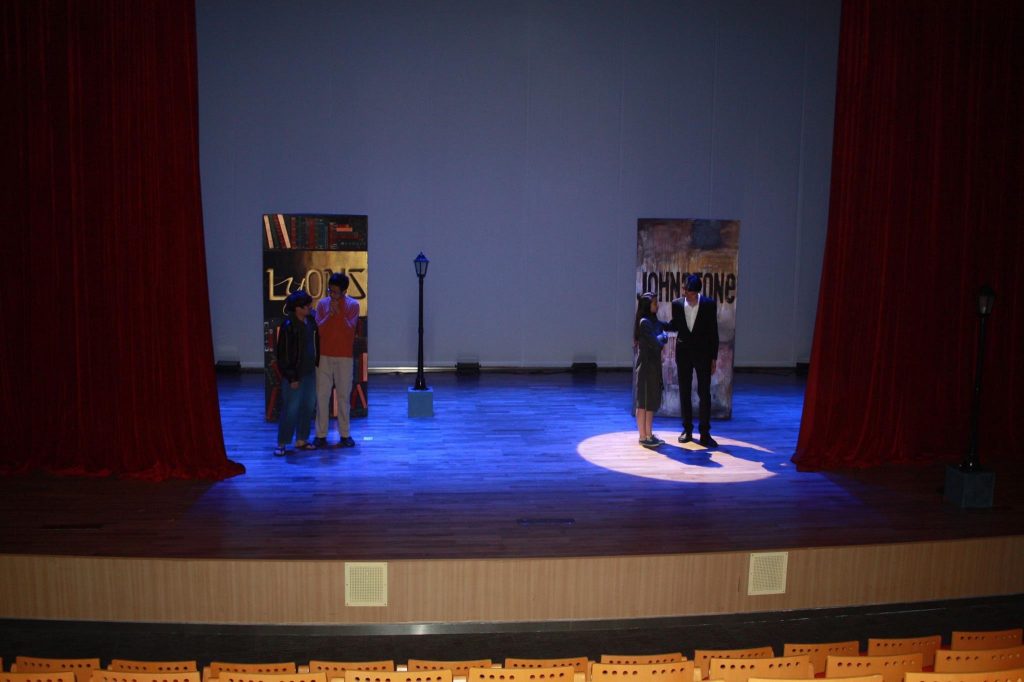 Before I left Canada I was chosen for a Commonwealth Teacher Exchange to the United Kingdom. I went to teach in beautiful Norwich, Norfolk and became familiar with the British National Curriculum at KS3 and KS4 in particular. In England I was exposed to the rigour of a Drama programme shaped around students completing exams for their GCSE’s. I liked in particular how Drama, Music and Art were all exam subjects with strict, demanding curriculums and the disciplines were treated the same as academic subjects. In Alberta, Canada the arts are not exam subjects and the curriculum is very much left up to the teacher. I left England after our huge whole-school production of “Jesus Christ Superstar” with much to think about.

The thinking led me to the Search Associates Recruiting Fair in London, England and a decision to work in International Schools. I accepted an offer to teach GCSE Drama and IBDP Theatre at one of the top British Curriculum schools in China. The school was expanding from the Junior School to a brand-new Senior School. Before I became a teacher I had done a degree in Technical Theatre and so I had a lot of input into the building of the brand new Black Box classroom I would be working in and the incredible state-of the-art Theatre. What a treat it was to work in such amazing facilities with such keen students and such small classes after public education! I was familiar with the GCSE Drama curriculum and put students through both the EdExcel and the Cambridge exam board. My top tip for teachers wanting to work in British curriculum schools is don’t apply unless you already know the British National Curriculum, and the requirements of at least one GCSE exam board. It’s a very steep (I would say almost impossible) learning curve if you don’t already come in with that knowledge. It was no problem that I had no IBDP Theatre experience. The school had an unlimited budget and was quick to send me for training for my Category 1 IBDP Theatre course and countless other IBDP workshops. It’s easy to do well and get good results working in this kind of environment. Don’t kid yourself though-the results and marks really matter to the students, the parents and the school and if you don’t deliver you’ll be out. My love of Theatre and the performing arts in particular was well supported here with productions of “Aladdin,” “Macbeth,” “Blood Brothers,” “Cinderella” and “Marriage Proposal” amongst many other class and exam productions.

In my current school in Singapore I’m in a different role. I am Head of Arts for the Secondary school. I supervise the Music, Visual Arts, Drama and Theatre programmes. I have six teachers working in the Arts Department. We are an IB World School and run PYP, MYP and IBDP curriculum. It’s important as HOD Arts to make sure we offer a balanced programme, no one art discipline can take precedence over another. Our students in Years 7, 8 and 9 all take all three arts classes. In Years 10 and 11 they choose one of the Arts disciplines to specialize in for two years and complete their exam ePortfolio of four assignments in Year 11. At the school we also offer IBDP Visual Arts and Theatre for two years. I teach some Drama classes and Theatre, but I am also given a lot of HOD time to manage staff, take care of the budget, ensure curriculum is being taught well, arrange standardisation and moderation of marks and a myriad of other responsibilities. I have my IBDP Cat 2 now and am an Examiner for the IBDP Theatre curriculum.

We run Arts Nights for the performing arts in each semester, as well as a school Talent Show. The Visual Arts puts up displays of art at these times as well as participating in the huge IN Exhibition of Visual Art from fifteen International Schools in Singapore as well as the IBDP Visual Arts Exhibition in the Spring. We run extensive co-curricular and extra-curricular activities for the students in the arts like bands, singing groups, drumming lessons and arts workshops. We are an International School Theatre Association School and run a lot of workshops through them e.g bringing the theatre company ‘Frantic Assembly’ in from the UK or Marco Luly- a Commedia dell’ Arte expert in from Italy. We run two Musicals a year, the Secondary Musical for Years 9-13 and the Primary/Middle School Musical for Years 3-8. The last four years we have done “Urbs, Urbis,” “Arlecchino and the City of Love,” “Little Red Riding Hood and the Wolf, “ “A Christmas Carol” and currently with a team of ten teachers and over 75 students “Cinderella, Rockerfella.” All of our shows are performed in professional theatre facilities we rent in Singapore. All of this is such a pleasant change from fighting for the arts survival in a Canadian public school, and having to fight for every cent we wanted to spend. I wish I had gone to work in International Schools much earlier in my career, but better late than never! 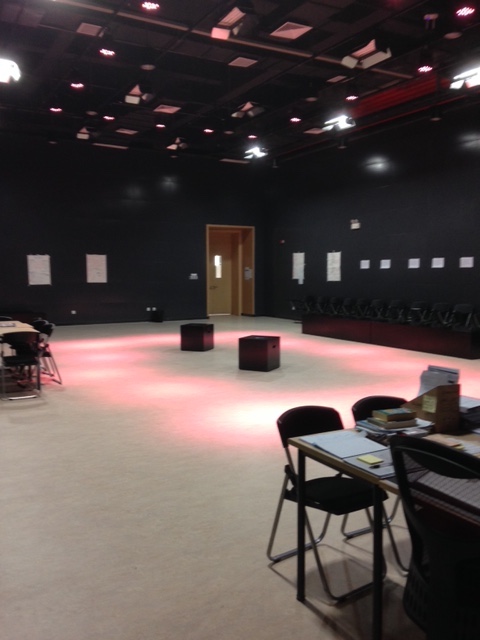 This article was submitted to us by International School Community member, Sara Lynn Burrough. Sara Lynn Burrough has worked as a Drama/Theatre teacher for the past 38 years in Canada, Australia, the United Kingdom, China and Singapore. She has a BEd, an MEd, was a professional stage manager at the Banff Centre for the Arts and studied Technical Theatre at McGill University in Montreal. In Canada as a teacher she worked for many years for Northern Gateway Schools in Alberta, and during that time was selected for two teacher exchange programmes. Her first exchange to Australia was with Alberta Education and the Queensland Department of Education where she taught at Costessey High School, in Coolum Beach on the Sunshine Coast. Her second exchange was with the prestigious ‘League for the Exchange of Commonwealth Teachers’ (LECT) where she was one of two Canadian teachers selected to go to the United Kingdom for the millennial year to the United Kingdom. The Queen Mother was the patron of LECT and as she was celebrating her 100th birthday that year Sara Lynn was privileged to attend the celebrations in London as an invitee. In 2013 Sara Lynn decided to teach in International Schools and attended the Search Associates recruiting fair in London, England. From there she went to Dulwich College in Suzhou, China to teach GCSE Drama and IBDP Theatre in the Senior School. After China Sara Lynn went to Singapore for almost five years as Head of Arts (Music, Visual Arts, Drama) at Chatsworth International School where she taught MYP Drama and IBDP Theatre.

Using our unique Comment Search feature on our website (premium membership access needed), we found 96 comments that have the keyword “Drama” in them, and 14 comments that had the word “The Arts” in them.

Here are some comments that shown a positive light on Learning Support programs at international schools:

“The school just celebrated its 50th anniversary and there are many banners around the school. The school in involved with the SITS programme which is a quality drama and arts programme for kids.” – Oslo International School (17 Total Comments)

“Stoke City FC just started this school year and there are several other “big” initiatives as well, mostly in music and drama departments.” – Western International School of Shanghai (312 Total Comments)

“It is limited. In primary there is futsal, while secondary usually has volleyball and basketball. Baseball is popular but it is not offered in any organised way. The school usually participates at the MUN conference in Kobe in February each year. Drama and arts offerings have increased in recent years.” – Hiroshima International School (64 Total Comments)

“The school offers no sports programs, and occasionally offers a drama Club to students, depending on teacher interest.” – Alexandria International Academy (78 Total Comments)

“Piloting the iPad initiative this year and also looking to expand the arts program with the addition of the multi-purpose hall that houses a mini-theater.” – Universal American School in Dubai (57 Total Comments)