New Survey: What percentage of your staff is expat hired?

Topic:  What percentage of your staff is expat hired? 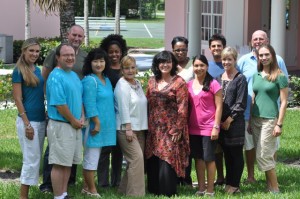 Many international schools hire locally.  The locally-hired teachers can be both host-country nationals or expats that moved to that country before they got the job. These locally-hired people are sometimes the preferred hire to choose because if they might be a good fit that is also typically a cheaper option.  Of course this can be frustrating for people outside of the country trying to get a job there (e.g. a person from the United States trying to get a work visa in Europe).  Other teachers are hired locally because they are teachers of the host country’s language/curriculum; a post that many expats most likely wouldn’t be qualified to do anyway.

Then there is all the controversy at some schools related to how the expat-hired teachers are getting better benefits and salaries than the locally-hired ones; always a topic of contention!  Not fair really, the locally-hired teachers (especially the expat ones) are definitely unhappy they are NOT getting the extra benefits their expat-hired counterparts are getting (like if they have the same degree and experience and they hold a similar posting at the school).

What is the perfect ratio of expats versus locally-hired expats versus host country teachers at an international school?  Is their one? Does it even matter? Share your comments and experiences! 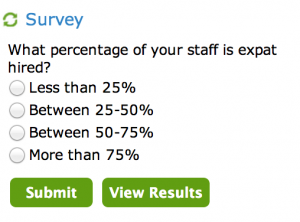 So, go ahead and vote What percentage of your staff is expat hired?  Go to the homepage of International School Community and submit your vote today!  You can check out the latest voting results here.