New Survey: Which region in the world would you most NOT want to move to next?

Topic:  Which region in the world would you most NOT want to move to next? 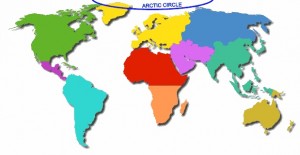 There is always going to be a region of the world that you would most NOT want to move to.  They always say at international school recruitment fairs to be open to positions in all areas of the world, but in reality that is just not likely for many candidates.  Though on the other hand, we also know some international school teachers that one time did take the risk and had selected a position in a region that they were not really interested in at the time, and then they ended up actually really enjoying their time living and working there.  Who knows then what the best advice is for teachers out on the look for a teaching job abroad at an international school?

Is there one region in the world that is more popular than the others?  We are not for sure.  The “popular” regions seem to keep on changing every few years or so.  On the other hand, there seems to be a group of international school teachers for each region of the world.  For those who will choose NOT to interview for a position in the Middle East, there are definitely a handful of other candidates that ARE interested in applying for that job in that region. 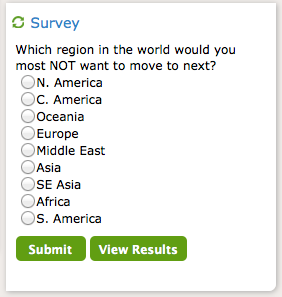 There are many reasons that you would NOT choose to live and work in a specific region: Love, Travel, Career, Money, School, Location, etc.  Which ever reason or reasons that are the most important to you (at that specific time period in your life) will help you decide on which region is the best for you and NOT the best for you.

For the very flexible candidate, the one that has the goal to live in as many regions of the world as they can, they will be on the look out for a region that they haven’t been to yet!  Is there an international school teacher out there that has lived and worked in all the regions in the world?  If so, we would like to interview that person for our member spotlight feature.

So, which region in the world would you most NOT want to move to next?  Go to the homepage of International School Community and submit your vote today!  You can check out the latest voting results here.