Survey results are in: How important is it to be able to communicate in the local language in your current placement?


The survey results are in, and it seems as if most visitors and members of International School Community who voted think that it is basically not so important to be able to communicate in the local language at their current placement.

Of course, knowing the local language is important.  We all know how closely related a language is to the culture that uses it.  On the other hand, how much can native speakers of English “get-away with” not communicating in the local language and only speaking English?  It is getting easier and easier it seems in many locations in the world. 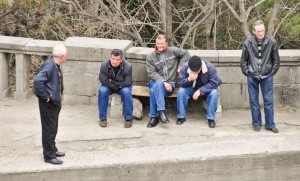 So let’s say you are living in a place where it is very important to be able to communicate in the local language.  Do you have the “gift” of language learning?  Most likely you are thinking that all the other people around you have the gift and you don’t!  It is the argument that people (e.g. international school teachers) like to talk about often and at length: can all people learn 2nd languages as an adult or is it just some people who have the gift and can do it much more “easily”?

It is always a topic of discussion for an expat and their other expat colleagues; your colleagues ability to learn (or not learn) the local language.  You often hear us saying to each other: “wow you are very good at (local language)!” or “You are studying a lot it seems and it is paying off” or “I wish I could speak as good as you.”  These comments or observations may or may not be exactly true, but it is definitely our perception of other expats around us and we are very sensitive to this issue due to our own ability or or lack of ability to communicate in the local language.

You might say it is important in every location to know the local language; it can greatly enhance your experience living in a culture and part of the world that is unknown to you. Even if the need isn’t there to be able to communicate in the local language, most of us want to put forth our best effort to learn it and not just give up so easily.  Taking risks, going outside of your comfort zone, and being willing to make mistakes would be part of a philosophy that a successful 2nd language learner would adopt.  Some countries even provide you with free language classes as a new immigrant there; paid for by the local government.  That would make it even easier for you to take on this challenge to acquire another language.

Have you been in the following situation though?  One day you walk into a store in your current placement.  You start talking in the local language.   The person working at the store just immediately talks back to you in English.  Then the next day you walk into the same store, but different worker.  You ask if they know English.  The person says yes and proceeds to give you a lecture on how you should learn the local language and try and speak it.

Sometimes it seems like you can’t win some days.  Local people in other countries kind of act the same in this regards.  It doesn’t matter where you are, the locals definitely have their opinion about the second language learning abilities of the immigrants living there and how they should be able to use the language.  Many times though your exchange is very positive, sometimes too positive…when the local showers you with compliments about your ability giving you a false sense of your true ability in the language.  It is all a matter of opinion sometimes.  One local might think you are good, another one not so much.

I have even been in some countries (where there is a relatively small population speaking a certain language), and they just tell me “well it is not so useful to learn our language, you might as well just stay with communicating in English as all people here can speak it.” Funny that!

One International School Community member said: “On my current assignment in Copenhagen, I technically do speak the local language, since English is ubiquitous. However, I find it difficult to learn Danish as there is little opportunity to practice given my full time commitment to speaking English at work and taking on-line classes at night. On previous assignments in Japan and Bosnia and Herzegovina, I found not learning the language to be a stumbling block to communication and true understanding. Ultimately, learning the local language helped to further my interests to open up rich conversation about culture as well as to make a connection with others. I’ve noticed this helpful both inside and outside the classroom.”

One final question then is how do you respond to the 2nd language learners of English in your home country (if that is indeed an English-speaking country)?  Surely, now you can relate better to their situation and be more sensitive to their ability level in English (if it is low).